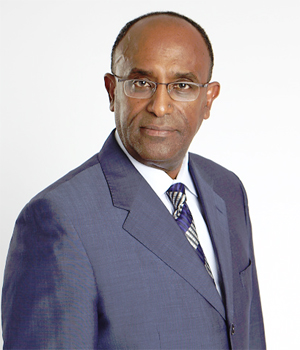 A CONSULTANT who first described how diabetic nerve damage is caused by impaired circulation of the nerves has been awarded one of the most coveted international prizes in medicine in recognition of his outstanding contribution to the field.

Professor Solomon Tesfaye, a Consultant Physician/EndocrinologistÂ at the Royal Hallamshire Hospital, Sheffield, and Honorary Professor of Diabetic Medicine at the University of Sheffield, is the first person in the UK to be awarded the prestigious Camillo Golgi Prize since 2003.

The international prize â€“ which is bestowed by the European Association for the Study of Diabetes to one person across the world for extraordinary achievements in the treatment and management of diabetes â€“ highlights the cutting-edge work impact Professor Tesfaye and his colleagues from the Royal Hallamshire Hospital have had in helping patients with diabetic nerve damage.

Diabetic nerve damage is a distressing illness causing intolerable pains in the feet and legs which is often unresponsive to medical treatments. It affects up to a third of patients with Type 1 and Type 2 diabetes. Patients often experience loss of sensation in the feet â€“ making these vulnerable to inadvertent injury, infection and amputations.

In some patients the loss of sensation in the lower limbs is paradoxically associated with chronic severe pain exacerbated by a vicious cycle of anxiety, depression and lack of sleep. The hospital costs of one major amputation followed by intensive rehabilitation is around Â£40K. However, the cost of the illness to individuals and relatives as well as society with time lost from work is incalculable.

Professor Tesfaye and a team of researchers from Sheffield Teaching Hospitals NHS Foundation Trust were the first to show the detailed structure of the peripheral nerves in people with diabetes.

He then went on to lead a major European study highlighting that nerve damage in diabetes is caused not only by high blood sugar levels but also by traditional risk factors for coronary heart disease such as cigarette smoking, high blood pressure, high cholesterol and obesity.The findings of this groundbreaking study were published in the prestigious New England Journal of Medicine and have opened the potential for new treatments.

More recently a number of studies led by Professor Tesfaye have shown that diabetic nerve damage is not just confined to the peripheral nerves in the legs but also involves the spinal cord and the brain â€“ leading to better understanding and treatments of the disease in the future.

Professor Tesfaye was mentored and trained in diabetes by Professor JD Ward, a previous Sheffield consultant.

A number of new treatments have been developed as a result of research carried out by Professor Tesfaye including electrical spinal cord stimulation for persistent diabetic nerve pain which is unresponsive to drug therapy. Sheffield is only one of a handful of specialist Units that offers this treatment.

Professor Solomon Tesfaye, of the Royal Hallamshire Hospital, who described winning the prize as a â€œdream come trueâ€ said the international acclaim from the award would boost further funding and research into the illness: â€œEver since I was a junior research fellow it has been my dream to win this prestigious prize, which to me is the highest honour in my field. However, the credit for this award should also go to the many excellent research fellows who worked with me, to our Diabetes Department and our Trust that supported me.

“Since winning the award I have been overwhelmed by congratulations from some of the greatest creative thinkers and inspirations in my field, so I am truly honoured that the advances made in Sheffield have been recognised through this prestigious international award. The award is great news for patients, as it will help us attract even more funding to further improve treatment and management of this chronic illness.

â€œIâ€™d like to dedicate this award to the patients whoâ€™ve supported our research, as without them improvements in care wouldnâ€™t be possible, and to my excellent research fellows and co-investigators for their dedication and commitment.â€

â€œThe diabetic neuropathy Unit at the Royal Hallamshire Hospital is recognised as one of the best in the world, so we are honoured and privileged that Professor Tesfayeâ€™s extraordinary achievements have been singled out as having a significant global impact on the treatment and management of diabetes.â€

Professor Tony Weetman, pro-vice-chancellor of the Faculty of Medicine, Dentistry and Health at the University of Sheffield, said: “I am thrilled that Solomon’s outstanding work has been recognised by the award of this prize: he joins the ranks of major UK clinical scientists working on diabetes who have previously been recipients of the award. His work exemplifies the best of translational research, taking an important clinical problem and using novel techniques to identify new approaches to treatment, and it underlines how much can be achieved when clinical staff collaborate with those in the University.”

The Camillo Golgi Prize will be awarded to Professor Tesfaye by Professor Andrew J M Boulton, President of the European Association for the Study of Diabetes. In addition to receiving the award, Professor Tesfaye will deliver the 29th Camillo Golgi Lecture at the 50th European Association for the Study of Diabetes annual meeting on Tuesday 16 September, 2014 in Vienna, Austria. The lecture, which will be attended by around 10,000 eminent researchers from across the globe, will be posted on the internet for some years.