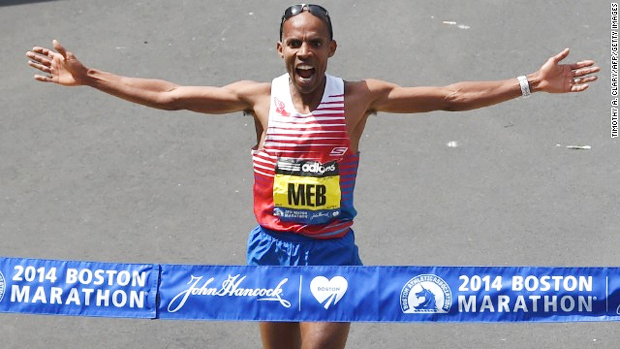 The Boston Marathon took place this past week and it was a pretty great victory for East Africa.

In the womenâ€™s race, Kenyan Rita Jeptoo won for the second time in a row. In the menâ€™s race, Meb Keflezghi stood first; he is the first American to have won the Boston Marathon since 1983. In addition to Olympic medals, Meb had won the New York City Marathon in 2009, making him the first American to do so since 1982. As you have guessed it, Meb Keflezghiâ€™s name isnâ€™t quite the stereotypical all-American name, in fact itâ€™s not Meb. It is actually short for Mebrhatom. He is originally from Eritrea and went to the US in 1987. His historic victories have put him all over the news in the US as well as the entire world. I have to be honest that I was getting quite a kick out of how his name was being pronounced, or shall I say mis-pronounced, by the different news anchors in the US as they announced his win. For that reason alone, I understand the shortening of his first name to Meb, if they couldnâ€™t handle Kefelzgi, I would hate to see how badly Mebrhatom would have been butchered!

His win started a discussion, one that many seem to dismiss quite easily but is a lot more complicated than it seems. The question of whether he â€œtrulyâ€ is American or not became an issue of debate. This is not the first time that a one-dimensional approach to identity a person has been used to define oneâ€™s true identity. In my opinion, this is simplistic and very passÃ©. In a world where migration is constantly growing and made easy by technology and borders are no longer what they used to be, to try and pin down oneâ€™s true â€œnationalityâ€ or identity to a government issued piece of paper is unrealistic. Let me be clear that Iâ€™m not arguing that Meb is American or not American. Iâ€™m merely pointing the absurdity of the topic of debate. Meb is free to feel as American, Eritrean, Italian, Indonesian or any other nationality and ethnicity as he feels; it is not for us to say what. The one thing I have noticed among immigrants who decided to change their nationalities is that no matter how much they feel connected to their adoptive country, they still have some attachment to their country of origin.

Before I proceed, I want to mention an interesting encounter I had a few days ago. I met a young Ethiopian-American girl who is getting ready to graduate from college next month. Whatâ€™s so striking about her story is that this young girl used to be homeless, has suffered insurmountable challenges that she somehow has risen above. She moved from Ethiopia while she was a teenager and was thrown into realities of a foreign country with a foreign language. She was also thrown out of her familyâ€™s home, went through the foster home system and ended up on the streets. From there she decided that education is the only way out. The decision to go to school was her own, but she was lucky enough to get support from social workers and non-profits in the area she lived and she later received a scholarship. This young ladyâ€™s story rings true to Americans as well as many immigrants. Her realization of the American dream is evidence that although it is a lot more difficult the â€œAmerican dreamâ€ still exists and can come true. After all, werenâ€™t the first ones to experience the American dream immigrants?

To say that her achievements are solely attributable to her Ethiopianness is a mistake, itâ€™s ignoring the possibilities and options that have been made available to her by her adoptive country. Yet to say that she doesnâ€™t have any place in her country of origin is also another mistake as it is part of her journey. She said that what she really wants to do is to share her story, and show young people in the US that there are possibilities and that they shouldnâ€™t give up. She also wants to learn how to connect with women in Ethiopia and support them anyway she can. In my opinion, this young lady and Meb are inspirations. Their inspired journeys remind me that sometimes all one needs is a little support, encouragement and an environment that nurtures talent. Rather than discussing whether they â€œtrulyâ€ are American or not, I think the conversation we should be having is â€œhow do we create these opportunities for our youth at home?â€