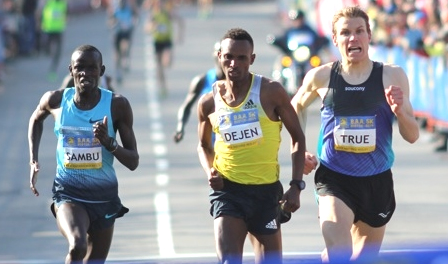 But this time he had to lean his way to victory as Ben True, 28, a native of North Yarmouth, Maine and a two-time winner (2011 and 2012), matched him stride for stride down the final 100 meters and the two crossed the line almost as one. True also recorded a time of 13:26.

In the womenâ€™s race, Molly Huddle, 29, of Providence, worked her way from fifth to first over the last half mile, then snuck around Mamitu Daska of Ethiopia with 100 meters to go and sprinted to victory in 15:12, tying the event record. It was her first victory in the BAA 5K.

In the sixth year of the BAA 5K, the first event in the BAA Distance Medley, the field was expanded to 10,000 and the start and finish moved to Boston Common to accommodate the runners.