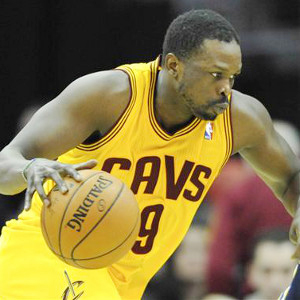 Luol Deng of the Cleveland Cavaliers has been voted the 2013-14 winner of the J. Walter Kennedy Citizenship Award, named after the second commissioner of the NBA and presented annually by the Professional Basketball Writers Association to the player, coach or trainer who shows outstanding service and dedication to the community.

The two-time All-Star forward recently recorded a public service announcement for the EnoughProject.org, urging peace during a time of renewed conflict in his native South Sudan. In the video, he tells young people, “Look around you, and reach out. Make peace among those who are fighting. Forgive one another and encourage others to forgive. Build trust with people who fear each other. You are young, and if you are wise, you will build bridges with people your age that will last a lifetime. It is not too late to startâ€¦but it is not too soon either.”

This is his latest contribution to a number of international causes, including The Luol Deng Foundation, which is a global non-profit organisation that uses basketball as a platform to give hope to those in Africa, the United Kingdom and the United States. The work in Africa focuses on building outdoor basketball courts and delivering initiatives to bring together local communities. Two courts, funded by Deng, will open in the summer of 2014 and include 12 hoops and locker rooms as well as basketball gear (shoes, jerseys, equipment). Plans are also in the works to increase the support of schools and renovate and build schools in South Sudan.

In the US, Dengâ€™s work has been focused primarily on the communities in which he has played, Chicago and Cleveland. He has funded Thanksgiving and holiday events that provide meals and toys to the under-served and has also served as a mentor to the â€œLost Boys of Sudan.â€ He is also an avid supporter of the NBAâ€™s Basketball without Borders programme and has participated in PSAâ€™s to raise awareness for World Malaria Day.

“The breadth and depth of Luol Deng’s community service elevated him from a deep pool of committed candidates,” PBWA President Mary Schmitt Boyer of the Cleveland Plain Dealer said. “But, really, all the candidates and their communities are winners.”