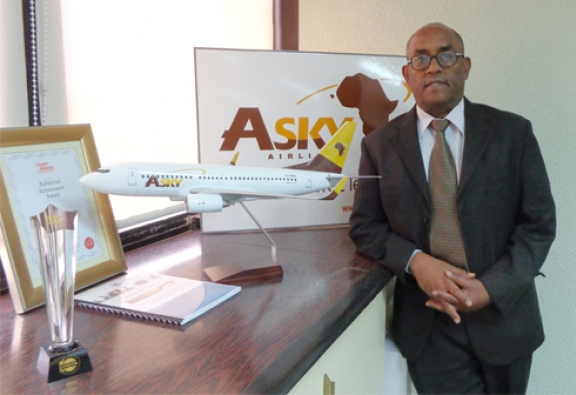 The quality, dedication and above all excellence in management have a price.

ASKY, the Pan-African airline has received the award for “AFRICAN COMPANY OF THE YEAR.“Â It was during the 2nd edition of “THE AFRICA CEO FORUM” organized in partnership with the African Development Bank (ADB) of 17 to 19 March 2014 in Geneva, Switzerland.

The award was received by the Chairman of the Board of Directors Mr. Gervais Koffi Djondo.He was accompanied by Mr. Yissehak Zewoldi, CEO of ASKY.

This award recognizes ASKY for its contribution to regional integration and trade development in the subregion.Â It is a recognition and thus an incentive to the company for its significant and multifaceted economic development of Africa competition;Â a bell ringing that should encourage more to support and make this sector a growth pole.

Speaking during the ceremony, the Chairman of the Board of Directors has dedicated the award to all of Africa.Â The price of all those who have understood the importance of coming together to merge the energy to put in place, to make sacrifices, this Airline international dimensions, to gradually raise and insurance challenges Africa faces in the field of air transport. 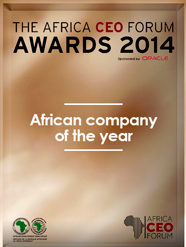 ASKY is the creation of several regional institutions: the Bank for Investment and Development (EBID), the West African Development Bank (BOAD) and the Ecobank Group.Â The company is a commercial private company managed by experienced professionals from 27 countries of our continent.

ASKY vision is to build an international leading company, connecting the largest number of African countries in the region in the world, based on an innovative and robust technology based itself on the client’s culture and service in line with the traditional African hospitality.

ASKY, the Pan-African airline currently operates a fleet of Next Generation 7 Boeing 737-700 aircraft including 3 and 4 Dash Q-400.

ASKY employs staff from more than 27 countries in Africa and the World.