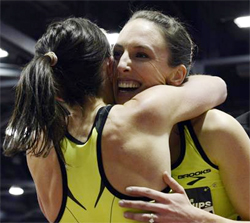 Standing in the mixed zone in the Ergo Arena, Gabriele Grunewald reflected with satisfaction on having made it through the first round of the womenâ€™s 3000m on the opening morning of the IAAF World Indoor Championships on Friday (7) – then looked ahead to the challenge of facing Genzebe Dibaba in Sundayâ€™s final.

With due respect to the Ethiopian phenomenon who has swept through the world record books in her trailblazing 2014 indoor season, Grunewald has taken on a more formidable opponent.

In fact, the 27-year-old from Minneapolis, Minnesota, has done so twice over. And, happily, she has lived to not only tell the tale but to launch an impressive international running career.

It was back in April 2009 that Grunewald had her first confrontation with cancer.