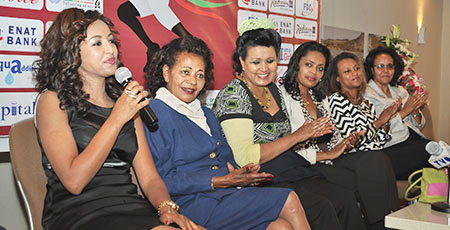 Addis Ababa, Ethiopia – Ready! Set! Go! The 11th edition of the annual women only run, â€˜Choice Women Firstâ€™ 5km Run is set to take place on Sunday 9 March 2014. 10,000 women and girls are expected to take part in this yearâ€™s race. The first race was held in May 2004 in light of recognizing the achievements of Ethiopiaâ€™s great female athletes and to support the broader changes regarding the role of women in Ethiopiaâ€™s economic and social life.

Since then the race has been promoting key messages about women and has become a celebration of the overall contribution of women in our countryâ€™s development.

According to Dagmawit Amare, Great Ethiopian Run innovative and strategic manager, registration will start on Wednesday, February 12. The participants will receive a t-shirt, a baseball cap and medallions depending on how soon they finish the race.

â€œThe first 4,000 who finish the run will receive a dark green medal,â€ Dagmawit explained. â€œThe ones who finish from 4,000th to 6,500th will get blue medals. The remaining will get pink medals,â€

The participants will start and finish the race at Atlas hotel.

Mulu Solomon, president of the Ethiopian Chamber of Commerce, Meseret Mebrate, renowned actress, Desta Hagos, the first Ethiopian female painter to conduct an exhibition, and Teguest Yilma, D/Editor-in-Chief of Capital newspaper were among the exemplary ladies who addressed the gathering at the opening ceremony held at Radisson Blu Hotel.

This year female ambassadors that reside in Ethiopia will also compete. The winning ambassador will get a trophy as well as a one night stay at the Radisson Blu Hotel and a Spa Package.

The race is also used as a stepping stone for young and emerging female athletes. Tiki Gelana who won the 5th edition and was 2nd on the last yearâ€™s race became the second Ethiopian Female athlete to win Gold over the Olympic Marathon in London. Aselefech Mergia won the women race twice in 2007 and 2009. She won the 2012 Standard Chartered Dubai Marathon, become World-Half Marathon bronze medalist in 2008, second in the London Marathon in 2010 and won the 2012 Dubai Marathon early this year for the second time repeating her 2011 victory. 2010 winner, Sule Utura, eight months later the same year won the 2010 Great Ethiopian Run International 10k race.