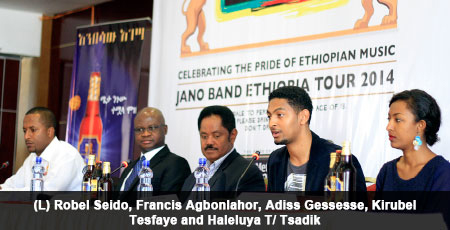 Addis Ababa, Ethiopia -Â Jano Band rocked out Addis Ababa with the kick off of their nationwide tour on Saturday January 18th at the Tropical Gardens. The tour that is sponsored by Meta Brewery S.C, the first concert was attended by over 5,000 rock music lovers.

The nationwide tour is being carried out under Metaâ€™s â€œCelebrating the pride of Ethiopian Musicâ€ campaign.

â€œHaving recently returned from our U.S tour, which was phenomenally well-received, Jano is incredibly proud to bring this momentum to its home country and people as it embarks on this nation wide tour,â€ said the bandâ€™s manager Adissu Gessesse at a pre concert press conference held at Harmony Hotel on Wednesday January 15th.

Metaâ€™s â€œCelebrating the pride of Ethiopian Musicâ€ campaign aims to encourage Ethiopians to â€œcelebrate life responsiblyâ€ according to a press release from Diageo. The statement also said that through the campaign, Meta aims to tap into the heart of Ethiopian music and support the advancement by spotlighting well-known as well as up and coming Ethiopian artists, who characterize the breadth of local music.

â€œMeta is proud to support Jano Band, the voice of a new Ethiopian generation, through the â€™Celebrating the Pride of Ethiopian Musicâ€™ campaign. Over the course of the past twelve months, I have been continuously impressed with Janoâ€™s abilities to push not only the boundaries of Ethiopian music, but also their art and abilities day after day,â€ stated Francis Agbonlahor, Meta Abo Breweryâ€™s Managing Director.

It is not the first time that Jano and Meta haveÂ  worked together. Meta also sponsored the Bandâ€™s 2013 Ethiopia tour which was held in Adama, Mekelle, Hawassa and Jimma.

Dates for the upcoming concerts which will be held in Dire Dawa, Gondar and Bahir Dar, will be announced soon.