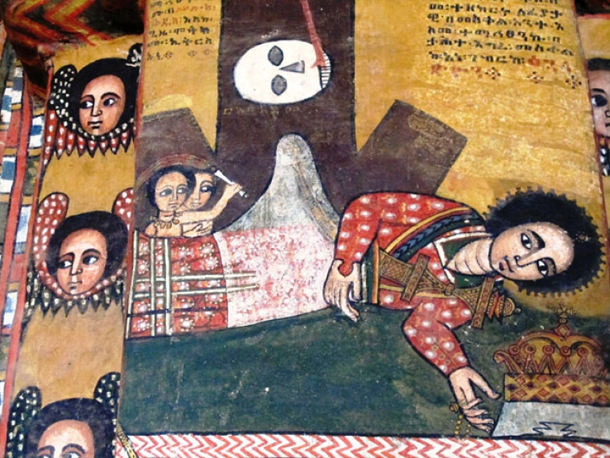 Traditional Ethiopian art forms are rich in color and symbolism, yet as, with many areas, western influences tend to dominate the scene.

One reason is the lack of historical documents to explain the ancient techniques, and there is a real danger that without adequate teaching the unique skill will die out altogether. Ã‚Â Tibebeselassie Tigabu investigates.

The saints were painted in reversal gaze so as to hypnotize the onlooker, which also used what is known as the frontal technique. To avoid the reversal gaze and to depict sinful and devilish people, the painters used the profile technique by drawing only one eye.

These paintings can be seen in the many ancient churches and manuscripts of Ethiopia, including Gondar’s Debrebirhan Selassie Church.

Moving forward to the 21st century, what do these characteristics mean to the art community? I visited the Ale Felegeselam Art School to find out.

Can they read the signs? Or like many classical thoughts interrupted by time, is there no connection to the traditional paintings? Many Ethiopian artists know the concepts of the western schools of thought, like abstract, realism, minimalism etc, without recognizing traditional Ethiopian elements. The school’s curriculum has been criticized for being too Eurocentric.

The phasing out of traditional art is not only observed in art schools, churches famed for their traditional paintings are now incorporating the western styles.

In ancient times saints were painted as brown or black people, like, for example, in the Debrebirhan Selassie church, Gondar. Yet, the influence of western art is becoming more apparent. Nowadays it is common to see a Michael Angelo, Leonardo Da Vinci or Sandro Botticelli style of painting.

Even those paintings with traditional iconography are Ã¢â‚¬Å“modernizedÃ¢â‚¬Â in a western way when restored. Read complete story in The Reporter.