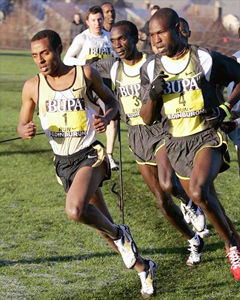 Held at Holyrood Park, venue of the 2008 IAAF World Cross Country Championships, Bekele will be treading the same soil that played host to his 11th and most recent world cross gold medal

The 31-year-old Ethiopian was victorious at the Great Edinburgh Cross Country three times in a row from 2006 to 2008, but more recently he has suffered two defeats, finishing fourth in 2010 and 11th in 2012.

This will be BekeleÃ¢â‚¬â„¢s sixth appearance at the Great Edinburgh Cross Country and he will be keen to even the balance on his score sheet in the Scottish capital.

But SaturdayÃ¢â‚¬â„¢s race could be a tough test for the 5000m world record-holder, as the 4km distance might be a bit short for someone who is currently in high-mileage training ahead of his marathon debut in Paris on 6 April.

BekeleÃ¢â‚¬â„¢s situation might play into the hands of his main contenders; brother Tariku Bekele and world 1500m champion Asbel Kiprop from Kenya. 26-year-old Tariku is the Olympic 10,000m bronze medallist and since 2012 he has defeated older brother Bekele three times, having never done so before.

Kiprop won gold medals over 1500m at the 2008 Olympic Games and 2011 World Championships before retaining his title last year in Moscow. The 24-year-old knows Holyrood Park well, having raced there twice before. In 2011 he finished second, then one year later he won the 3km race, beating Bekele.

But Bekele recently showed that he can still sprint, having beaten BritainÃ¢â‚¬â„¢s double Olympic and world champion Mo Farah in a thrilling finish at the Great North Run in September. Read more