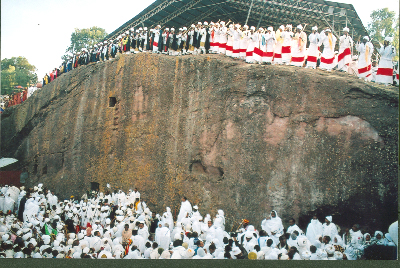 The 11 medieval monolithic cave churches of Lalibela could be taken as the crown jewels of all heritages of the country. The whole town is a living billboard to the medieval and post-medieval civilization of Ethiopia.

As this news story is written, one of the tourist destination towns, Lalibela, known for colourfully celebrating Christmas with spiritual songs and outdoor and indoor ceremonies, was busy to welcome the numerous foreign and local tourists expected to flock to the town to attend Ethiopian Christmas(‘Genna’ ) celebration next week*. This year these events will take place amidst the ongoing road construction works there.

In an exclusive interview with The Ethiopian Herald, Habitamu Tesfaw of the town’s Culture, Tourism and Sports Office said that the town has enjoyed a conspicuous upswing over the past eight years in tourist influx and related businesses. Over 40,000 foreign and local tourists had visited the town in 2013 alone.

Ã¢â‚¬Å“The number had more than doubled– from that of over 33,000 in 2005/06 to more than 68,000 last year affording an over 153 million birr in revenue. In general , close to 300,000 foreign and local tourists had visited the heritages over the last eight years enabling the country earn over 633 million birr from the sector.Ã¢â‚¬Â

Ã¢â‚¬Å“ In order to render the sector vibrant, in addition to the heritages, the office is engaged in promoting religious celebrations and traditional festivals like the ‘Ashendaiye‘, (young girl’s festival marked every August), Epiphany and Easter as tourist attractions.Ã¢â‚¬Â

However, obviously the rock- hewn churches beg for preservation and face-lift works that require experts’ touchÃ¢â‚¬â€a task which is beyond the office’s capacity. Ã¢â‚¬Å“ We have forwarded the request to Research and Conservation of Cultural Heritage Authority(ARCCH) since preservation of this magnitude is the authority’s responsibility. Now, the Authority together with the local community has pledged to mount an overall preservation work next month.Ã¢â‚¬Â

We are also doing some preservation work as per our local capacity. Ã¢â‚¬Å“ We regularly clean the surroundings of the church from garbages and hack away overgrowth. We cover churches without shelter with plastic sheets during rainy seasons, Ã¢â‚¬Å“ adding,Ã¢â‚¬Â what is more, the archaic heavy doors that are contributing to the damage were replaced with light ones. As well as drainage ditches and support walls are being built.Ã¢â‚¬Â

According to Habitamu, to ward off further threats to the heritages, after a thorough discussion with residents of the locality 537 re-settlers, to another part of the town, are provided with substitute houses fully equipped with running water and electricity.

Training is given to Micro and Small- scale Enterprises (MSEs) to improve services and to produce quality materials as well. While capacity limitation of sectoral organizations and limited number of flight are raised as formidable challenges by him.

By the end of the GTP, the country plans to increase the number of tourists to one million and to make Ethiopia one of the top five tourist destinations in Africa by the year 2020.

Mayor Melkamu Mamo on his part said that the growing tourism business is spurring investment in the hotel sector. Infrastructural development by the locals and the administration is also picking pace.

They as well are labouring to make the town tourist friendly and cozy to prolong their stay.Ã¢â‚¬Å“Residents including the 120 licensed tour guides are investing in standard hotels as well as improving quality service delivery. Ã¢â‚¬Å“ Now the town has 20 standard hotels to accommodate tourists whose number is spiraling.Ã¢â‚¬Â

Since asphalt roads are not allowed, we are building cobblestone roads to protect the heritages from the heavy movement of vehicles. The construction work is expected to be finalized within a month time,Ã¢â‚¬Â he said and added Ã¢â‚¬Å“ a 99- kms asphalt road is under construction at the outskirt of the town for motor vehicle’s convenience.Ã¢â‚¬Â

Meanwhile, Teferi Abebe of the Ministry of Finance and Economy Development said that the government has been allocating substantial amount of budget to the town’s infrastructural schemes. This fiscal year, 8.5 million birr is allocated for the purpose. As a result, without considering others, some 120 jobs are created for the town’s youth engaged in beautifying the town’s roads with cobblestones.

The Rock-hewn Churches of Lalibela are still preserved in their natural settings. A temporary light-weight shelters have now been installed over some churches with the collaboration of UNESCO.

To protect the Rock-hewn Churches,the government issued Proclamation No. 209/2000, which also established the institution in charge, ARCCH. But the major difficulty observed so far is the harmonization of the different projects and effective coordination between parties involved.

*The article appeared in the Addis Ababa-based English newspaper “Ethiopian Herald” a week ago.