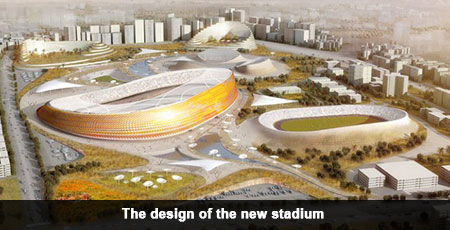 Addis Ababa, Ethiopia – The area between Bole Medhanialem and Imperial Hotel is being cleared to make way for the construction of a 60,000-seat stadium, estimated to cost 1.6 billion birr. Residents of the area, commonly known as Ã¢â‚¬Å“Chereqa Sefer”, have been relocated, as many houses had to be demolished for the construction. Many squatters have also been removed from the area.

Last year in June the Federal Sport Commission officially declared the winner of the new architectural design of the new stadium that it plans to build. The Winner of the design was reportedly JDAW and its engineers.

The stadium will be EthiopiaÃ¢â‚¬â„¢s first that is up to FIFAÃ¢â‚¬â„¢s standards and guidelines. Currently there are only two stadiums in Addis Ababa. The Addis Ababa Stadium which was built by Emperor Haile Selassie half a century ago. Another stadium, which has yet to be fully finished, isÃ‚Â  Abebe Bikila Stadium.

It was reported that the commission believes the old stadiums are preventing them from holding more football matches. In addition, the bigger stadium will generate more revenue, as is common for other nearby countries that have bigger stadiums.