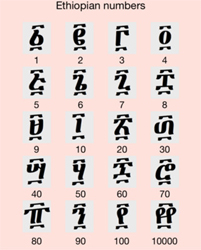 Addis Ababa, Ethiopia – Walking around this city, I canÃ¢â‚¬â„¢t help but wonder why many cafes and restaurants do not have their names or their menus available in the local language. Everything is written in English without any translation, which indicates that they expect their clientele to be fluent in English. I always ask, does this mean that weÃ¢â‚¬â„¢ve really reached a point where we no longer need things to be written in Amharic? Before I even think of answering this question, I can clearly see that although the menu is in English, one would experience a lot of difficulties ordering in English as most of the time the staff does not speak the language.

So who are these businesses trying to attract? Are they aware of the irony exposed by their businesses?Ã‚Â They canÃ¢â‚¬â„¢t possibly be aiming to only attract the international community, or are they? Questions and irony aside, I believe that this is an indication that English is becoming a more prevalent medium of communication in Addis Ababa. Yet English is not coming on its own, itÃ¢â‚¬â„¢s bringing with it a culture, humor, calendar and so much more. This week marked the end of 2013 and the beginning of 2014, in theÃ‚Â Gregorian calendar. There were gatherings that were organized in different parts of the city to celebrate the years end and a new beginning. A decade ago, these gatherings were very small but as the years passed their attendees grew so did the events themselves. January 1st was just any other day, but now itÃ¢â‚¬â„¢s become more meaningful to the extent that some local companies are giving their employees the day off.

IÃ¢â‚¬â„¢m slightly alarmed by this trend as it indicates a progressive Ã¢â‚¬Å“leaving behindÃ¢â‚¬Â of local languages andÃ‚Â customs for those that are foreign to us. It may seem that IÃ¢â‚¬â„¢m being too critical on our westernized waysÃ‚Â and exaggerating the impact that it may have but whenever I think of it an Amharic proverb comes toÃ‚Â mind: Ã¢â‚¬Å“Ã¡â€¹ÂÃ¡Ë†Æ’ Ã¡Ë†Â²Ã¡â€¹Ë†Ã¡Ë†ÂµÃ¡â€¹Âµ Ã¡Å Â¥Ã¡â€¹Â«Ã¡Ë†Â³Ã¡Ë†Â³Ã¡â€°â‚¬ Ã¡Å ÂÃ¡â€¹ÂÃ¡ÂÂ¢Ã¢â‚¬Â This translates into Ã¢â‚¬Å“when the calm water drowns you, it does so by fooling youÃ¢â‚¬Â. It may sound like it is just small things here and there, English names for buildings, stores. Or even English on menus and on billboards, but a few decades down the road this may actually be the norm and writings in local languages may be the exception. And on top of it all, we might even see our calendar be a mere symbol of how we used to keep track of days and no longer a calendar that we practically use. From where IÃ¢â‚¬â„¢m standing, itÃ¢â‚¬â„¢s all fun and games today but tomorrow we may stop and look around and no longer recognize who we are and who our ancestors used to be.

ItÃ¢â‚¬â„¢s the small acts to add up and make up a big one, if slowly we individually prefer to no longer speak a certain language, whether weÃ¢â‚¬â„¢re aware of it or not weÃ¢â‚¬â„¢ve passed a death sentence on that language. IÃ‚Â always give the example of GeÃ¢â‚¬â„¢ez numbers. Their usage is very limited today; in fact theyÃ¢â‚¬â„¢re mainly usedÃ‚Â in churches. But a few years ago, the BBC did a small documentary on an Ethiopian technique of addingÃ‚Â numbers, something I had never heard of before. It was very simple, accurate and not many knew of it.Ã‚Â Today we use foreign numbers and do math in foreign ways that seem very normal. In fact GeÃ¢â‚¬â„¢ez numbers are considered as exotic and used in art. If we allow ourselves to be taken by this wave, GeÃ¢â‚¬â„¢ez letters and calendar will be items we visit in the museum, if we bother to build them one.

Author: Ã‚Â Leyou Tameru is a graduate of Georgetown and Addis Ababa University Law schools, specializing in International Legal Studies. Born and raised in Addis Ababa, she seeks to understand the impact of economic, political and social issues on everyday lives.