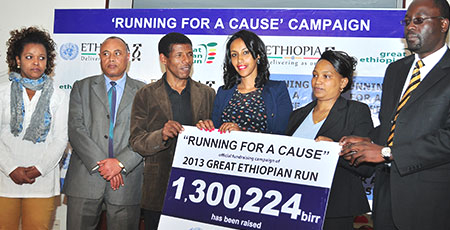 Addis Ababa, Ethiopia –Ã‚Â As it does every year, the Great Ethiopian Run (GER) announced that it has raised over 1.3 million birr in collaboration with the United Nations office in Ethiopia, for charity. At an event held at the Ghion Hotel on Thursday, December 26th 2013, the two organizations presented the donation to the Ministry of Women, Children and Youth Affairs.

During the past seven years, over 4 million birr has been donated to various charities, including the Abebech Gobena orphanage, Marry Joy, as well as the Kechene orphanage.

GER is preparing to hold different races such as the 2014 MDG race, to be held in Axum and Arba Minch on January 12th and 26th, 2014 Women First 5km to be held on March 9th, 2014 Coca-Cola race on 13th of April as well as the EVERY ONE campaign race to be held May 4th, among others.

Besides holding several races all year long, GER is also working on spreading awareness regarding the Millennium Development Goals, not just through races but also through entertaining programs such as concerts.

Back in November, the Association of International Marathons and Distance Races (AIMS) awarded GER the AIMS Social Award. The award, which highlights races working towards achieving the United Nations Millennium Development Goals, was presented to the successful Ethiopian 10km race during the first AIMS Best Marathon Runner Awards Gala Dinner on November 8th 2013 in Athens, Greece.