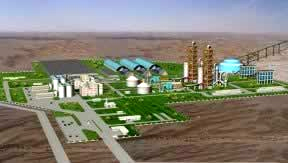 Addis Ababa, Ethiopia -Ã‚Â An Ethio-American company based in the US, North Holdings Investment Inc., is to build a new cement factory with an outlay of USD 800 million in the Amhara Regional State near Dejen town.

North Holdings Investment Inc president, Temesgen M. Bitew, told The Reporter that his company is planning to build the factory in east Gojam, Dejen wereda, Menda locality. Temesgen said with two production lines the factory will have the capacity to produce 8.4 million tons of cement

The idea of building the cement factory was conceived in 2006. According to Temesgen, the feasibility study was completed. The company is to hire a Danish contractor called FLS that would build the factory, supply and install the machineries.

The cost of the investment is estimated at USD 800 million. Temesgen said the company will secure loan for the project from a London based investment bank. Ã‚Â He declined to disclose the name of the bank.

With the view being energy self sufficient North Holdings plans to build a coal manufacturing plant in Gonder, Chilga locality where a coal deposit is found. According to Temesgen, the total cost of the investment will reach 1.1 billion dollars.

The company has secured a 250 hectares plot of land and hopes to commence work on the project in the New Year. When the whole project is realized fully it will create 15,000 jobs, according to Temesgen.

North Holdings is a business corporation established by 12 business people in Delware, United States in 2006.