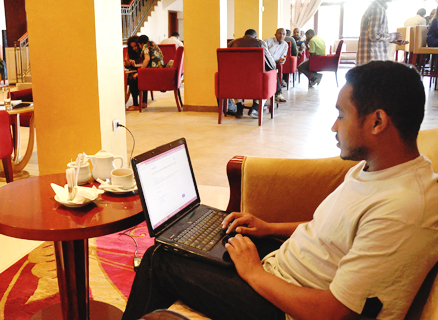 Addis Ababa, Ethiopia -Ã‚Â Teshale Tucho, 41, a businessman, was beaming with delight on Thursday, December 12, 2013, whilst surfing the net in the lobby of the Kenenisa Hotel, in the Bole Medhanealem area of Bole District.

Teshale has been frequenting the hotel, which is one of a long list of Wi-Fi hotspots in Addis Abeba, for three months now.

Ã¢â‚¬Å“I first came here to meet a group of business partners,Ã¢â‚¬Â he recalls. Ã¢â‚¬Å“I saw people accessing the internet and did so with my laptop also.Ã¢â‚¬Â

Although Teshale only recently started visiting hotels for the Wi-Fi connections, this trend has been seen around town for some time. Just a couple of years ago, only a few Internet hotspots were available in Addis Abeba Ã¢â‚¬â€œ a city with a population of four million.

Recently, however, it is becoming increasingly common to see hotels and restaurants offering the service for free. This attracts large groups of customers who arrive with their laptops, tablet computers or smart phones, eager to take advantage of the offer.

At Kenenisa Hotel, which was only recently opened, most of the people sitting in the lobby were surfing the net when Fortune visited on Tuesday, December 10, 2013.

The service is so popular that finding seating space in theÃ‚Â  lobby is a common problem, particularly for those who arrive in groups.

Ã¢â‚¬Å“I find it difficult to get seats when I come with friends,Ã¢â‚¬Â says Gelila Tesfaw, a college graduate, who enjoys tweeting with friends and accessing entertainment websites.

This trend of customers crowding hotels and some restaurants is, however, not accidental. These establishments are cognisant of the high fees paid for access to the Internet, and the difficulty of obtaining high speeds even when affording the service.

According to the latest report of the International Telecommunication Union (ITU) released in early November, Ethiopia, with less than two percent internet penetration, is lagging behind. It comes in 40th out of the 46 African nations included in the ITU report. Read more