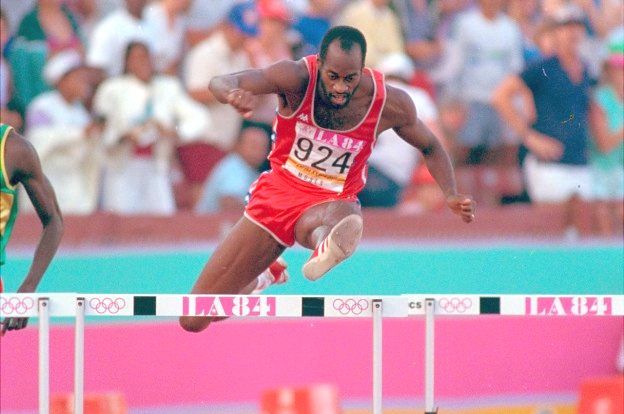 NEW YORK Ã¢â‚¬â€œ USATF legend Edwin Moses was honored today by the United States Olympic Endowment (USOE) at its annual luncheon in New York City. Moses, along with George Killian were honored in recognition of their commitment and contributions to the Olympic and Paralympic movements.

Moses, a two-time 400-meter hurdles Olympic gold medalist and current board member for the United States Anti-Doping Agency, received the William E. Simon Award, given to individuals who have made extraordinary contributions to the advancement of the Olympic and Paralympic movements. Simon Ã¢â‚¬â€œ the awardÃ¢â‚¬â„¢s namesake Ã¢â‚¬â€œ was president of the USOC from 1981-85 and served as secretary of the treasury for three years under Presidents Richard Nixon and Gerald Ford.

Killian, former member of the USOC board of directors and International Basketball Federation (FIBA) president, received the George M. Steinbrenner III Sport Leadership Award. The award is presented annually to honor outstanding members of the Olympic and Paralympic family who have contributed to sport through management, sport organization endeavors or the enhancement of competitive opportunities, and who have displayed qualities of leadership, ethical conduct and dedicated responsibility during a longstanding commitment to sport.

The USOE was established after the 1984 Olympic Games in Los Angeles to benefit Olympic and Paralympic sport in the United States. A nonprofit organization, its objective is to support the United States Olympic Committee and its member organizations. A separate entity from the USOC, the USOE oversees the corpus of endowed funds that resulted from the surplus from the 1984 Games.

Moses is a two-time 400-meter hurdles Olympic gold medalist and four-time world record holder in the event. As a track & field great, he captured two world championship titles. A qualified physicist, Moses pioneered the development of policies against the use of performance-enhancing drugs while chairman of the USOCÃ¢â‚¬â„¢s Substance Abuse, Research and Education Committee. Moses served on the IOC as a member of the AthletesÃ¢â‚¬â„¢, Medical and Ethics commissions, and on the USOCÃ¢â‚¬â„¢s AthletesÃ¢â‚¬â„¢ Advisory and Executive committees. Current chairman of USADA, Moses also serves as chairman of the Laureus World Sports Academy, an association utilizing the positive influence of sport as a tool for social change.

Killian was the president of FIBA from 1990-98, a member of the USOCÃ¢â‚¬â„¢s board of directors from 1967-2004 and a member of the International Olympic Committee from 1996-98. A former basketball coach and administrator, Killian earned the IOCÃ¢â‚¬â„¢s Olympic Order in 1996 and the USOCÃ¢â‚¬â„¢s Olympic Torch Award in 2010. He served as president of the International University Sports Federation for more than a decade, and was a key figure in the growth and popularity of the World University Games. Killian served as the first executive director of the National Junior College Athletic Association from 1969 through his retirement in 2004 and served as the organizationÃ¢â‚¬â„¢s president from 1967-69.