Annual Match to Take Place at the STADE DE SUISSE on 4 March 2014, Dedicated to Support Recovery Efforts in the Philippines. 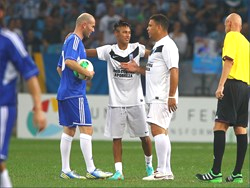 Geneva – SwitzerlandÂ – Football legends and UNDP Goodwill Ambassadors Ronaldo and Zinedine Zidane announced today that the 11th Match Against Poverty will take place on 4 March 2014 at the STADE DE SUISSE National Stadium in Bern, Switzerland. Proceeds raised will help recovery efforts in the Philippines in the wake of Typhoon Haiyan, one of the most devastating storms in history.

Ronaldo and ZinÃƒÂ©dine Zidane will mobilize their team of internationally renowned football players for a friendly match against the Bern professional football club, the BSC Young Boys and Friends.

Through the 11th edition in Bern we hope to be able to raise both awareness and funds for the people in need in the PhilippinesÂ said Zinedine Zidane. Working together in support of the victims of Typhoon Haiyan we will all be winners in the Match Against Poverty.Â

Football legends Ronaldo and Zinedine Zidane have been the driving force behind the match since its inception in 2003.

Last year we celebrated the 10th anniversary of the Match in Brazil and I am still very proud of its success. I am honoured that clubs such as BSC Young Boys have offered to host the eventÂ, said Ronaldo, who is now a key member of the FIFA World Cup 2014 Organizing Committee.Â This year we are concerned about the situation in the Philippines and we would like to help through the match to the global fundraising efforts for the countryÂ added Ronaldo.

Two thirds of the match proceeds will be used to bolster recovery efforts in the Philippines, where more than 5,000 people lost their lives to Typhoon Haiyan, with almost 1 million people displaced and an estimated further 11.8 million affected. To bolster the local economy UNDP has already begun a cash-for-work project clearing debris in Tacloban, and will continue its efforts to help those who have lost homes, businesses and jobs as a result of the typhoon.

Ã¢â‚¬Å“Our goal is to dedicate the proceeds of this 11th Match Against Poverty to help survivors rebuild their lives and help the Philippines on a path to recoveryÃ¢â‚¬Â said UNDP Administrator Helen Clark. Ã¢â‚¬Å“As the Philippines works to recover from this terrible tragedy, UNDP is there in support and to help strengthen the nationÃ¢â‚¬â„¢s resilience to future shocks.Ã¢â‚¬Â

BSC Young Boys will donate the remaining third of the profits to the clubÃ¢â‚¬â„¢s partner charity, the Laureus Foundation Switzerland. The Foundation provides financial and practical support to sports-related projects at the national level, and is part of the global Laureus Sport For Good Foundation, which supports over 140 projects in 34 countries around the world.

Hanspeter Kienberger, President of the Board of STADE DE SUISSE, said BSC Young Boys and Berne were very honoured to be host and part of this important event. Ã¢â‚¬Å“We will do our very best for a successful evening in Berne in favour of people who are in difficult situationsÃ¢â‚¬Â, Kienberger added.

The match in Bern marks the return of the event to Switzerland, with the first edition held in Basel in 2003. Since then the match has been held in Madrid, Dusseldorf, Marseille, Malaga, Fes, Lisbon, Athens, Hamburg and Porto Alegre. Each match has supported specific projects in different countries facing difficult challenges.