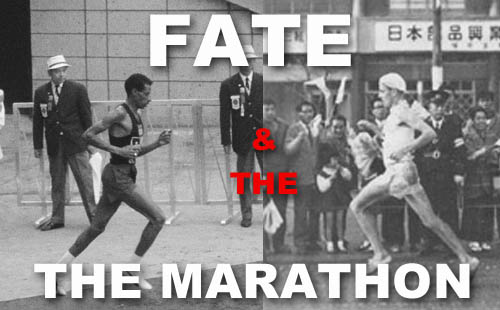 The last 10 miles of the 1960 Olympic marathon in Rome were run in darkness.

“No spectators were allowed on some sections farther out, and it was strangely surreal, running alone in the dark and silence,” recalled bronze medalist Barry Magee during a 2010 interview withÃ‚Â On the Run, the journal of Wellington Scottish Harriers, New Zealand.

As the course came nearer to the city, a multinational crowd of spectators lined the ancient Appian Way. I stood among them in the darkness, with friends from England. Oil flares, held on long poles by soldiers, lit the course, and we peered into the pools of flickering light, waiting for the runners. Suddenly, minutes sooner than we expected, they came, emerging almost mystically out of the night. We were looking for the world record-holder, Sergey Popov, or Aurele Vandendriessche of Belgium, and we were hoping for the Englishman Arthur Keily. But, in a surprise to us all, it was two Africans, well clear.

A half century later, we all know this was the moment when Africa arose as a marathon force, but at the time, it was a mystery in shadowy half-light. Rhadi Ben Abdesselam of Morocco we recognized from European cross country, but the other–lean, dark-skinned, composed, in green and red, skimming serenely in and out of the pools of light–was unknown. As he ran past we saw with astonishment that he was barefoot.

Abebe Bikila’s bare feet flicked over the hot surface. He heard Rhadi’s breathing and footfall, but he never once glanced aside. He sensed, as every good runner can, that Rhadi could be broken when the moment came. He waited.

Bikila saved his surge for the place he had agreed on with his Swedish coach, Onni Niskanen, just after 25 miles, as Niskanen later told author Norman Harris for his 1967 essay on Bikila inÃ‚Â The Lonely Breed. There stood the high stone needle of the Obelisk of Axum, an ancient treasure of Ethiopia, taken to Rome by fascist Italy in 1937. (It was repatriated in 2008.)

As they passed the Obelisk, Bikila slid ahead. Twelve thousand spectators cheered from special bleachers. Bikila made no acknowledgment, focused inward. The Arch of Constantine, where the race finished, was floodlit in deep golden red. Bikila won barefoot in humid heat, on a course that was partly cobblestones, in a world record 2:15:16.2. It was a victory worthy of an arch of triumph.Read more