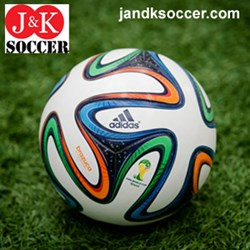 The wait is over; Adidas has released the official ball of the 2014 World Cup known as the Brazuca. J & K Soccer is one of the first online retailers to carry the ball which will be available for a limited time.

Springfield, MO (PRWEB) -Ã‚Â J & K Soccer is among the first online retailers to carry theÃ‚Â official 2014 World Cup Soccer BallÃ‚Â known as the Brazuca. Supplies of the coveted soccer balls arrived just in time for the Christmas shopping season and will make a great gift for the soccer-crazed. The balls are appealing to kids and collectors for their commemorative value. TheÃ‚Â 2014 World Cup in BrazilÃ‚Â is gearing up to be the biggest soccer sensation in decades and the official Brazuca balls are expected to sell out quickly.

For shoppers looking to buy an official Brazuca ball, note that there are 2 versions of the ball being sold in the United States. The 100% polyurethane version is the version being used in World Cup match play. A lower priced nylon/TPU ball is also available.

There is much anticipation of how the Brazuca play will play after 2010 Word Cup players complained that the Jabulani ball behaved erratically. Adidas has made several critical design innovations, most noticeably six identical “boomerang” shaped panels. The Brazuca’s swirling seam structure and a raised nub texture, similar to a basketball’s, are supposed to improve its touch and aerodynamics. The Brazuca underwent 2 and a half years of testing, including repeated kicks from a robot foot to ensure accurate flight trajectories. Adidas says players have commented that the ball has good transfer of power, grips well, and that its flight is “fair” and “consistent.”

J & K Soccer of Springfield MO, has Brazuca balls in stock now for purchase in their retail store or online. Adidas is making the balls available through June 2014, but they are expected to sell quickly and any collector, parent or child truly wanting one should purchase early.