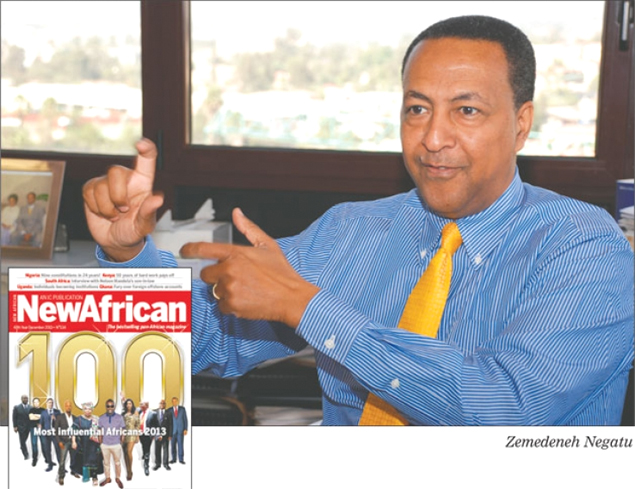 New-African Magazine has announced its annual list of the 100 most influential AfricansÂ in its December issue, which it says represents a list of individuals who have significantly impacted and realigned the continent’s landscape in their fields of endeavor and contributed in redefining the African narrative in 2013 and are expected to play a big role in 2014.

The magazine emphasized that influence is not about popularity and popularity is not always influential. The editors of the magazine also indicated that the influencer’s impact on public, social and political discourse is what largely helps determine their influence.

Some of the best known Africans on this year’s list include President Uhuru Kenyatta of Kenya, businessman Aliko Dangote of Nigeria, the richest African with a net worth of USD 16 billion, Donald Kaberuka, the president of the African Development Bank, Thabo Mbeki, the former president of South Africa and Mo Farah, the 2012 London double Olympic gold winner in 5,000 and 10,000 meters.

The largest number of people by category are from business (33), politics (20) and arts & culture (17). Nigerians top the list with 23, followed by South Africa with 22 and Kenya with 9. Ethiopia, the second most populous country in Africa has one person on the list, Zemedeneh Negatu, the highly respected Managing Partner of Ernst and Young.

Zemedeneh, who is an Ethiopian by birth but an American citizen, is admired for his tireless effort to promote Africa and Ethiopia to international investors. He was the lead author of EY’s report in 2009 which was the first to forecast that Ethiopia will become a middle income country by 2025 with a GDP of over $400 billion. Zemedeneh is one of the best public speakers from Africa and has spoken at major conferences such as the World Economic Forum (WEF) and Harvard University’s annual Africa Business Conference. He has appeared on numerous international media including the BBC, CNN, CNBC and recently wrote the widely circulated and discussed guest column in African Business magazine titled an extraordinary journey articulating the Ethiopian economy’s future prospects.

The past two years, Zemedeneh has been working on an initiative called collaborative investing by the Ethiopian diaspora in the USÂ and has been organizing the large diaspora in America to invest back home in Ethiopia. In 2012 he was the winner of the Pioneer Ethiopian Diaspora Business Person of the YearÂ award in Washington. He has received many other awards including as Ã¢â‚¬Å“Managing Partner of the Year for 2013Ã¢â‚¬Â by one of the top business magazines in the UK. Zemedeneh is married and has an 11-year-old son.

The 2013 list includes two influential people who live and work in Ethiopia: Nkosazana Dlamini-Zuma, the chairperson of the African Union (AU) from South Africa and Carlos Lopes, the under-secretary general of the UN Economic Commission for Africa, from Guinea Bissau.

Last year, in 2012, the list of influential Africans had three Ethiopians, Sheikh Mohammed al Amoudi, the billionaire owner of Midroc and Elleni G/Medhin, the founder and former CEO of the Ethiopian Commodity Exchange and Tirunesh Dibaba the 10,000 meters Olympic gold medal winner. The 2011 list had one Ethiopian, the great athlete Haile Gebreselasse.

Anyone who has done business in Ethiopia will have come across Zemedeneh Negatu, founder and managing partner of Ernst & Young in Ethiopia. Recently his firm has been responsible for many of the country’s major deals, including British alcoholic beverages company Diageo’s purchase of a local brewery. A true global citizen, having lived and worked extensively in North and Latin America as well as Saudi Arabia, Zem, as he is affectionately known, is often the spokesperson for the private sector at the country’s official international roadshows. He is part of a select group of business leaders who senior members of government consult during their strategy meeting retreats.