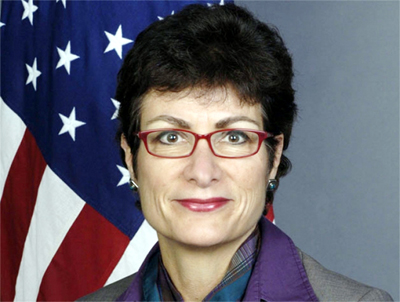 Addis Ababa, Ethiopia – The 16 Days of Activism against Gender Violence, beginning on November 25, offers an opportunity to renew the global commitment to free women and girls from violence, whether it happens behind closed doors or as a public tactic of intimidation.Ã‚Â

Whether it occurs in our own neighborhood or on distant shores, violence against women and girls damages us all – men and women alike.

Acts of violence against women are manifested in many forms.Ã‚Â  Here in Ethiopia, as in many other countries, young women who dare to dream of a better future are exploited as victims of trafficking.Ã‚Â  Setting out to find work outside their villages and away from families and friends, these women can be taken advantage of by mercenaries who promise to help them achieve their dreams in exchange for money.Ã‚Â  All too often, the promise crumbles and is replaced by the horror of forced labor or sexual slavery.Ã‚Â  They become prisoners when their travel documents are confiscated and can be subjected to beatings, rape or even murder.

These issues are in the forefront of my mind these days.Ã‚Â  I recently visited one of the transit sites for migrants returning to Ethiopia and spoke with women, many of whom were victims of trafficking or shared personal stories of terrible violence.Ã‚Â  I know that the Ethiopian government is equally seized with this issue and we will continue to work together to combat trafficking and protect women from this kind of violence.

The evil of trafficking of persons is evident to all, but I would also like to emphasize that the violence visited on women and girls by those close to them Ã¢â‚¬â€œ family, friends, employers Ã¢â‚¬â€œ remains an unspoken taboo in many countries, including Ethiopia.Ã‚Â  An estimated one in three women worldwide has been beaten, coerced into sex or otherwise abused in her lifetime by a current or former spouse or partner.Ã‚Â  This includes psychological abuse and various controlling behaviors such as not allowing women out of the house to see family and friends or forbidding women to access news, information or medical help.Ã‚Â  Unfortunately, too many women accept such behavior as justified.Ã‚Â  According to the 2011 Demographic and Health Survey conducted by EthiopiaÃ¢â‚¬â„¢s Central Statistical Agency, two out of every three Ethiopian women agree that wife beating is justified for a variety of reasons.

Ethiopia is not alone.Ã‚Â  Violence against women is a global problem, including in the United States.Ã‚Â  We all need to work togetherÃ¢â‚¬â€the international community, governments, multilateral organizations, private sector companies, and grassroots-level advocates to address and prevent violence from occurring. Many nations have passed legislation addressing gender-based violence; the next critical step is to work together to improve implementation of those laws in order to increase accountability and address impunity.

Together, we need increased advocacy and more interaction between policymakers and those who work in the field. We need to empower girls to speak up for themselves, and educate boys to speak up for their sisters. We must support the inclusion of men, boys, and critical community stakeholders Ã¢â‚¬â€œ such as religious leaders Ã¢â‚¬â€œ in addressing and preventing violence and changing gender norms and attitudes. We must ultimately overcome the deep-rooted gender inequalities that either tacitly allow or actively promote violent, discriminatory practices.

Countries cannot progress when half their populations are marginalized and mistreated, and subjected to discrimination. The United States has made gender equality and womenÃ¢â‚¬â„¢s empowerment a core focus of our foreign policy and we have made significant progress to address gender-based violence through the development of the US National Action Plan on Women, Peace and Security; the President’s Emergency Plan for AIDS Relief (PEPFAR), which has invested more than USD 215 million globally in GBV-related programming over the last three years; the work of the PresidentÃ¢â‚¬â„¢s Interagency Task Force to Monitor and Combat Trafficking in Persons; and efforts to incorporate gender-based violence programming into humanitarian response activities.

Evidence demonstrates that womenÃ¢â‚¬â„¢s empowerment is critical to build stable, democratic societies; to support open and accountable governance; to further international peace and security; to grow vibrant market economies; and to address pressing health and educational challenges When women and girls can live free from violence and are afforded equal opportunities in education, healthcare, employment and political participation, they lift up their families, their communities and their nations, and act as agents of change.Ã‚Â  As Secretary of State John Kerry has stated, Ã¢â‚¬Å“Investing in girls is a critical part of our duty to promote prosperity, security, and peace around the world. Empowered girls grow up empowered women. They grow up to be empowered mothers, leaders, and innovators.Ã¢â‚¬Â

Ed.’s Note:Ã‚Â Patricia Haslach is the US ambassador to Ethiopia. The article was provided to The Reporter by the US Embassy in Addis Ababa.Ã‚Â