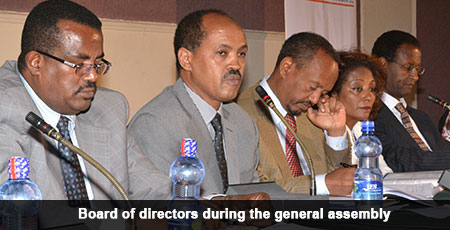 Addis Ababa, Ethiopia -Ã‚Â Berhan International Bank (BIB) S.C, one of the youngest banks currently operating, is to open over 20 additional branches throughout the country,Ã‚Â while consolidating its operation with information technology services.

So far, the bank has 22 branches and five sub-branches throughout the country. Seven of the 22 branches and four sub-branches were opened in the 2012/13 fiscal year, according to Abraham Alaro, Vice President of the bank. The newly opened branches are located in Alemgena, Meshualekia, Kera and Teklehaimanot in the capital and Bishoftu, Shashemene, and Jimma outside of Addis Ababa, according to the annual report the bank issued for the fiscal year.

BIB, which earned 70 million birr in profit over the previous fiscal year, is also finalizing plans to begin ATM services very shortly. Abraham told Capital that the bank has already finalized agreements to become the fourth member of the Premier Switch Solutions (PSS) S.C to use PSS over 60 ATMs. According to the vice president, the membership in PSS will help the bank accelerate ongoing efforts to launch card banking services with less time, effort and cost.

Over the 2012/13 fiscal year, Berhan International Bank earned a total income of 168.1 million birr. This showed an increase of 58.8 million or 53.8 percent compared to the previous fiscal year, which was 109.3 million. Income from interest stood highest showing an increase of 51.8 percent, while non-interest income increased by 48.2 percent. Ã¢â‚¬Å“Out of the total non-interest income, the highest share, 73.7 percent income is generated from foreign banking operations in the form of commission, service charge and gain on foreign exchange,Ã¢â‚¬Â the annual report of the bank for the fiscal year reads. Ã¢â‚¬Å“The share of commission income from guarantee was 18.9 percent, followed by service charge and commission from local banking activities, which is 7.4 million.Ã¢â‚¬Â Read more