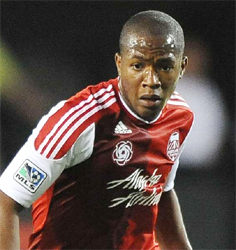 SEATTLE (AP) — Portland coach Caleb Porter believed Ryan Johnson could take advantage of matchups and gave him a start. The Timbers’ forward went out and proved his coach right.

Johnson flicked in a header early in the first half, and Darlington Nagbe (Liberia) scored midway through the second half on Saturday night as Portland beat the Seattle Sounders 2-1 in the first leg of their Western Conference semifinals series.

”We’ve got options up there – good options,” Porter said of giving Johnson the start. ”We’re going to pick the guy up top who we think fits the opponent we’re playing. To me, it made a lot of sense to go with Ryan Johnson.

”We felt his strength in the air, his physicality, his ability to hold the ball up, his athleticism and pace and power was a good matchup against (Seattle defenders) Jhon Kennedy Hurtado and Jimmy Traore.”

The third-year Timbers, playing in their first MLS postseason contest, need just a draw in Wednesday’s second leg at Portland to advance to the conference finals.

Osvaldo Alonso scored in the 90th minute for the Sounders, who need to win the second leg by at least two goals to win the aggregate total and advance.

If the Sounders outscore the Timbers by one goal in the second match to even the aggregate total, there would be overtime to decide the series.

Johnson’s goal was his 10th of the year for the Timbers, who went unbeaten through their last eight games of the regular season (5-0-3) to secure the West’s No. 1 seed.

Diego Chara started the play with a long pass toward the right side. Jack Jewsbury was on the receiving end and took it deep into the corner. He crossed it into the penalty area, and Johnson, cutting across goalkeeper Marcus Hahnemann‘s 6-yard box, flicked a header that went off Hahnemann’s hands and into the far side of the net early in the 15th minute.

”It was just instinct. The odds of the ball making it to that far post run are a lot harder so the near post run is a good one,” Johnson said. ”It was a good ball, and all I had to do was redirect it. We always believe that if we score the first goal, we’re going to win the game. It’s true, and that’s how it happened.”

The Sounders nearly tied it five minutes later as Clint Dempsey took a free kick 23 yards up from the goal, but Portland goalkeeper Donovan Ricketts tipped it over the top.

Nagbe made it 2-0 in the 67th minute. Kalif Alhassan (Ghana), playing on the right side, sent the ball into the box. Nagbe spun around a Seattle defender and parked a shot past Hahnemann into the left side for his 10th of the year.

Alonso got one back for Seattle late after a long throw-in by Brad Evans was redirected by Shalrie Joseph out to Alsonso, who drilled it in past Ricketts from 14 yards straight in front for his first of the season.

”We were able to score a late goal, and that gives us an opportunity on Thursday,” Alonso said. ”Better to go down there 2-1 instead of 2-0.”