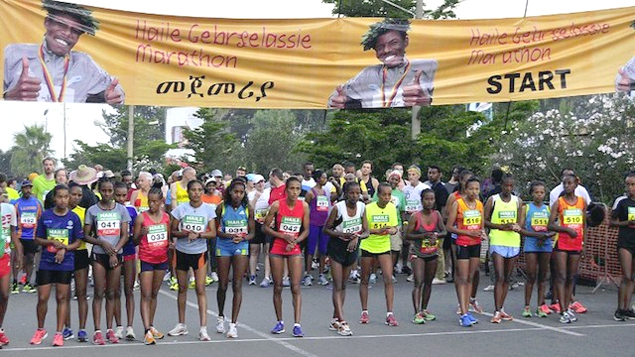 The sun had barely risen but the cool morning air was buzzing with excitement: 350 participants had gathered in Ethiopia, the land of runners, for the country’s first international marathon organised by athletics legend Haile Gebrselassie.

Sunday’s race, which drew 150 elite Ethiopian athletes and about 150 foreign “fun runners”, promises to boost professionalism in a country that has produced scores of world-class runners, many of whom started running barefoot along dusty country roads.

Race organisers sought to draw Ethiopia’s top athletes to the race in Hawassa, 275 kilometres (170 miles) south of Ethiopia’s capital, by offering the largest cash prize in Ethiopian racing history Ã¢â‚¬â€œ close to $5Ã‚Â 300 (3Ã‚Â 855 euros) each for the top man and woman competitors.

The marathon is part of an overall boost to Ethiopian athletics, which in the past two years has been bolstered by new world-class training centres and a series of competitive races that have drawn crowds from around the world.

“Two years ago there was nothing here, athletes they wanted to come to Ethiopia to train there was no facility,” said Gebrselassie, who hosts several runs throughout the year, including the annual Great Ethiopian Run, which last year drew close to 40Ã‚Â 000 people.

Today he has his own training centre, Yaya Village, on the outskirts of Addis Ababa and last year, 5Ã‚Â 000 and 10Ã‚Â 000 world record holder Kenenisa Bekele opened a running centre with one of the country’s only professional-rate running tracks.

With its high altitude and consistently sunny weather Ã¢â‚¬â€œ the country is often dubbed the land of “13 months of sunshine” Ã¢â‚¬â€œ Ethiopia has long been heralded as one of the best places in Africa for long distance training, rivalled only by neighbouring Kenya.

Sunday’s marathon winner, Gudissa Shentema,said the race was a historical victory for him as he had never run a competitive marathon on home soil, and that it has encouraged him to train harder.

“I’ve been competing in different countries but this one gives me a lot of motivation to continue,” he said, forehead glistening with sweat after his 42 kilometre-run.

Gebrselassie said he hopes to draw casual runners from abroad too, in order to promote a running culture and give foreigners a chance to tour Ethiopia.

“It’s a very good opportunity to bring tourists to see Ethiopia,” he said, adding that the international exposure is crucial for changing Ethiopia’s image.

Annie Delp, 38, who came from the US to run the half-marathon following a ten-day tour of northern Ethiopia, said the event is a chance to open foreign eyes to Ethiopia, a country better-known as a nation plagued with famine and unrest in the 1980s.

“It would change everything because people don’t know how beautiful Ethiopia is, how sweet the people are and how awesome the food is, there’s just so much,” said Delp, who came first in the women’s half marathon.

For some, the race was also a chance to run alongside Ethiopia’s future long distance stars and meet Gebrselassie, a global running hero.

Simon Newton, 35, did a “running tour” of Ethiopia before doing Sunday’s marathon, which he described as “fantastic.”

Second-placed Newton has run around 40 marathons before but said the Haile Gebrselassie race was the “most enjoyable” he has run.

As he tired around 35 kilometres, a group of children ran alongside him for motivation and at one point he had to dodge a monkey sitting on the road.

Gebrselassie said that while this year’s race drew only modest crowds, he hopes the event will grow in the future, perhaps to gain global standing and rival the New York or London marathon.

“Of course, you cannot predict what will be in the future… now with this marathon, if people know about it, you never know,” he said with his characteristic wide grin.