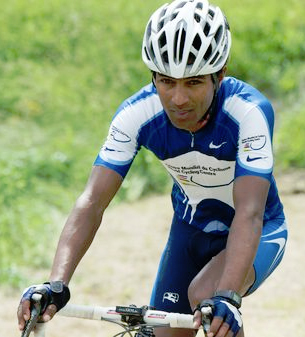 A trainee this season at the World Cycling Centre (WCC), Merhawi Kudus will race in the professional peloton in 2014 with Team MTN-Qhubeka p/b Samsung.

This 19-year-old Eritrean is considered one of the most exciting talents from Africa. He finished second in the general classification of the Vuelta Ciclista a LeÃƒÂ³n (2.2) and has won amateur events in Italy (Freccia dei Vini) and France (Tour de CÃƒÂ´te d’Or).

FrÃƒÂ©dÃƒÂ©ric MagnÃƒÂ©, the Director of the World Cycling Centre, expressed his satisfaction at the young rider’s move to a professional team:“Merhawi fully deserves a professional contract. He is an extremely talented athlete and a nice, well-balanced guy, but above all he is a champion who wants to win.”

At Team MTN-Qhubeka he will be reunited with Eritrean riders who also served their apprenticeships at the World Cycling Centre. Among them is Daniel Teklehaimanot, who spent three years at the WCC in Aigle (Switzerland) followed by two years with the Australian Orica-GreenEdge team.

Kudus started cycling at the age of 14 and shone in the junior category in Eritrea, even though he took part in road events on a mountain bike. His potential was recognised by the World Cycling Centre Africa and he was invited to train at Potchesfroom (South Africa). International competition soon followed and he won a stage and wore the leaderÃ¢â‚¬â„¢s jersey at the Tour of Rwanda.

He joined the WCC in Aigle in early 2013 and in August competed in the Tour de l’Ain as a neo-pro with the French team Bretagne-SÃƒÂ©chÃƒÂ© Environnement.

“Over the last four years, the professional peloton in general and the UCI WorldTour in particular have recruited many trainees from the World Cycling Centre,”Ã‚Â noted MagnÃƒÂ©.Ã‚Â “A WCC stamp of quality is gradually being established from our training of athletes from cycling’s developing regions.”

The WCC Director added that “the professional contract signed by Merhawi Kudus is a further step in the partnership between Team MTN-Qhubeka and the World Cycling Centre and its training satellites that was established in 2013.”

Douglas Ryder, MTN-Qhubeka Team Principal, explained why he had recruited the WCC trainee:Ã‚Â “Merhawi is a young rider but has shown maturity and ability beyond his years. African cycling is in a great place with Louis Meintjes finishing second in the Under-23 road race at the UCI World Championships and Merhawi finishing fifteenth in the same event.”