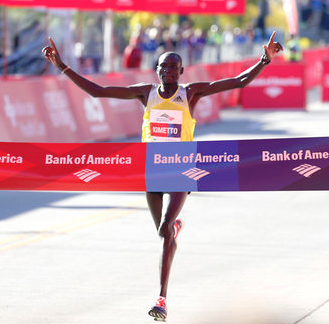 Kenyan Dennis Kimetto repulsed a challenge from compatriot Emmanuel Mutai to win the Chicago Marathon in a course record time on Sunday.

Kimetto was on world record pace throughout the final kilometers while Mutai crossed eight seconds, also smashing the old course record in 2:03.53.

Security was increased for the race, which attracted 40,000 runners, after the Boston Marathon bombings in April which killed three people.