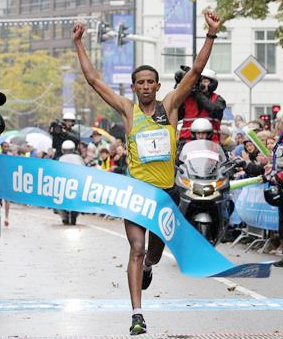 Ethiopian favourite Yemane Tsegay Adhane won a thrilling battle at the conclusion of the 2013 De Lage Landen Marathon Eindhoven, crossing the line in 2:09:11 and ending a 14-year Kenyan winning streak in the Dutch city on Sunday (13).

Heavy rain meant that the course record of 2:05:46 was unlikely to be challenged this year but there were still three men were in contention for the honours with barely a kilometre to go.

The 28-year-old Tsegay Adhane, who can boast of a personal best of 2:04:48 when winning the 2012 Rotterdam Marathon, then surged as the trio entered the old market area in the centre of Eindhoven and shook off his younger compatriots Bazu Worku and Belay Assefa, who finished second and third in 2:09:19 and 2:09:31 respectively.

Ã¢â‚¬Å“I am happy for the win, but not so happy with the time. I said before that I wanted to run under the course record (set by KenyaÃ¢â‚¬â„¢s Dickson Chumba in 2012) but it was not possible with this weather. IÃ¢â‚¬â„¢m sorry, I wanted to do better,Ã¢â‚¬Â said Tsegay Adhane, although no apology was necessary after his valiant performance after battling with the elements.

Sisay Lemma made it a quartet of Ethiopians in the top four as he came home fourth in 2:09:44.

The weather forecast had changed dramatically less than 24 hours before gun went in the Dutch city and the runners had to race in driving rain, a strong breeze and cooler conditions than expected, with the temperature just six degrees at the start.

A pack of 14 runners, including four pacemakers, went through 21km in 1:04.11, well off the 1:02:35 target time that had been discussed the day before at the technical meeting.

Shortly after the halfway point, runners started to steadily drop off the back of the leading group.

Kiptoo was to drop out shortly afterwards but Kigen Korir carried on driving the pace with the four Ethiopians slipstreaming behind him as they went through 30km in 1:30:59.

At that point, a winning time just inside 2:08 was still on the cards but, as Kigen Korir started to drop back just before 32km although he stayed in the race to the finish, the Ethiopians then started to concentrate on racing each other rather than against the clock.

Lemma began to lose contact three kilometres before the finish as his fellow Ethiopians commenced their three-way duel, with Tsegay Adhane eventually triumphing in emphatic fashion to continue his streak of winning at least one Marathon every year since he started racing over the classic distance in 2008.

Kenya’s Ruth Wanjiru was a convincing winner of the women’s race in 2:34:48, winning by 51 seconds from local runner Andrea Deelstra.

Phil Minshull for the IAAF