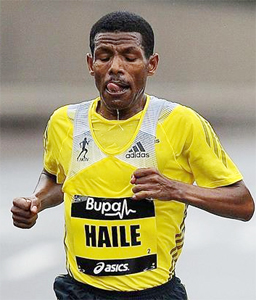 Haile Gebrselassie showed that he still has plenty of speed and stamina in his legs when he clocked 1:01:10 to win the Great Scottish Run in Glasgow on Sunday (6).

The evergreen 40-year-old Ethiopian distance running legend in his first ever appearance in Scotland set a course record after surging clear of his Kenyan rival Emmanuel Bett in the penultimate kilometre of a race held in warm but overcast conditions.

Bett, the fastest man in the world over 10,000m on the track last year, a distance at which Gebrselassie set three World records, finished 31 seconds in arrears in 1:01:41.

“Today was really wonderful. I am so happy,” said Gebrselassie. “It was a perfect set-up. I didn’t expect this kind of weather. When I saw the time at 15k I knew we were heading for a fast time.Ã¢â‚¬Â

Gebrselassie can take plenty of pride in the fact that nobody older has ever run faster over the distance.

Last month, he ran 1:00:41 over the same distance at the Bupa Great North Run, an IAAF Gold Label Road Race, to finish third behind his compatriot Kenenisa Bekele and Great BritainÃ¢â‚¬â„¢s Olympic and World champion Mo Farah, although that raced is considered to be downhill for record purposes.

“After losing out in the last mile at the Bupa Great North Run I had to get clear today and decided to make my move when I did and it worked so well, I’m happy with this win,Ã¢â‚¬Â added Gebrselassie

Great BritainÃ¢â‚¬â„¢s Susan Partridge, who finished 10thÃ‚Â in the IAAF World Championships Marathon in August, was the first woman home in 1:10:40.