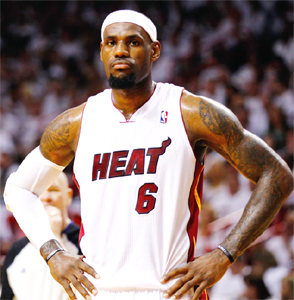 The Miami Heat star and four-time league MVP tops the NBA’s global list of jersey sales for this past season, according to numbers released Tuesday. James — who also has the top-selling jersey in the United States — outsold Derrick Rose of the Chicago Bulls,Kobe Bryant of the Los Angeles Lakers, Kevin Durant of the Oklahoma City Thunder and Heat teammate Dwyane Wade for the No. 1 spot.

James said having the world’s top-selling jersey “means everything” to him.

“To know that so many people look up to me, so many kids, that’s what means more than anything, that I continue to inspire the youth and they look at me as a role model,” James said after learning the news at Heat training camp in the Bahamas. “I understand, when you wear someone’s jersey, you actually like believe in them. You believe they can do supernatural things. It’s like an extension of our family, and I really appreciate that.”

The league unveiled the rankings — based on adidas’ global sales for the past season — just days before the start of NBA Global Games 2013-14, which includes eight preseason games in seven countries, then regular-season games in Mexico City on Dec. 4 and London on Jan. 16.

Many of the top names on the global-sales list — including Rose, Bryant and Durant — are on teams taking part in this season’s international matchups.

Carmelo Anthony is sixth on the global-sales list, followed by Dwight Howard (his now-former Lakers jersey), Deron Williams, Blake Griffin and Rajon Rondo to round out the top 10. In U.S. sales, James is followed by Rose, Bryant, Durant, Anthony, Wade, Howard, Williams, Griffin and Rondo.

Despite missing all of last season with a knee injury, Rose had the top-selling jersey in China, Latin America and Europe. James had the top seller in the Philippines.

To James, finishing atop these rankings further signified how things have changed since he made his decision to sign with Miami in 2010 after spending the first seven seasons of his career in Cleveland.

“I’ve come a long way,” James said. “I’ve come a long way. I’ve grown as a basketball player and as a person off the floor in every aspect since 2010. I’m definitely humbled by it, appreciative. You always hear me say that I’m just a kid from Akron, and to be able to have this stature and that accomplishment, I think that’s pretty cool.”