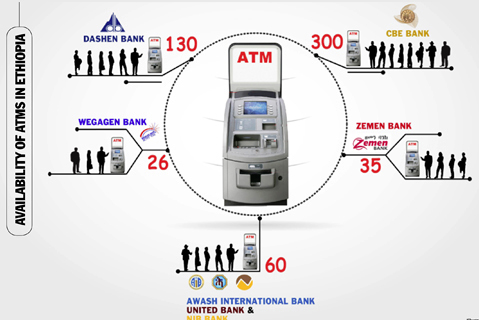 Ã¢â‚¬Å“It is very difficult to get in touch with me from Monday to Friday, because I will usually be in meetings,Ã¢â‚¬Â he explained. Ã¢â‚¬Å“I cannot even answer phone calls; my free time is very limited.Ã¢â‚¬Â

As a result of these time constraints, Mehari usually handles his personal errands long after working hours are over. Fortune met him on the eveningÃ‚Â  of Monday, September 23, around the Wabi Shebelle Hotel, located on Ras Abebe Aregay Street. He was attempting to withdraw money from his Commercial Bank of Ethiopia account, using an Automatic Teller Machine (ATM).

Mehari started using ATMs two years ago due to the convenience they offered. On that particular day, however, the ATM was not working properly and he could not make a withdrawal.

Ã¢â‚¬Å“I tried the ATM machines in different locations, but none of them were working. That is why I came here, but it says Ã¢â‚¬Ëœyour request cannot be acceptedÃ¢â‚¬â„¢,Ã¢â‚¬Â Mehari angrily complained.

Mehari is among the legion of bank customers frustrated with ATM service in the country. Although ATM cards are gaining traction Ã¢â‚¬â€œ with the Commercial Bank of Ethiopia (CBE), Dashen Bank (DB) and Awash International Bank (AIB) having 392,000, 270,000 and 30,000 cardholders, respectively Ã¢â‚¬â€œ customers routinely complain about frequent problems during transactions.

Cash machines are relatively new to Ethiopia, but their number is growing quickly, with banks eager to ease access for their customers.

The CBE started out with eight machines, 11 years ago, and now has 300. There are also an additional 158 under deployment and 200 in the process of procurement, says Ephrem Mekuria, communication manager at the CBE.

However, despite the BankÃ¢â‚¬â„¢s effort to improve access for its customers by increasing the number of machines, it is well-aware of the problems encountered by clients, Ephrem says. Network failure, due to service breakdown from the countryÃ¢â‚¬â„¢s sole telecommunications service provider, ethio Ã¢â‚¬â€œ telecom, and internal network problems, are the challenges faced by the CBE.

Ã¢â‚¬Å“Of course, our ATM services sometimes face interruption and most of the time this failure is attributed to ethio Ã¢â‚¬â€œ telecom,Ã¢â‚¬Â agreed Estifanos Befekadu, who is head for Promotion Division at Dashen Bank.

The latterÃ¢â‚¬â„¢s ATM machine network has reached 130, since the introduction of the service in May 2006. Moreover it has bought 40 additional ATMs that are capable of receiving deposits.