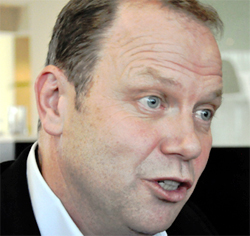 Born and raised in Leicester, in the UK, Andy Fennell, current president and chief operations officer (COO) of Africa with Diageo Plc, was in Ethiopia last week. Diageo Plc Ã¢â‚¬â€œ the largest liquor company in the world Ã¢â‚¬â€œ bought Meta Abo Brewery from the Privatisation & Public Enterprises Supervising Agency (PPESA), two years ago. Andy Fennell believes that the best route to growth is by focusing on people and maintaining the highest standards in execution. PepsiMax and Carling Black Label are among the worldÃ¢â‚¬â„¢s best beverage brands Andy has worked on and created a reputation for driving rapid growth. Andy was appointed chief marketing officer in October 2008. He then became the president and COO of Africa, effective from July 1, 2013. In this interview with Binyam Alemayehu, Editor-in-Chief,Ã‚Â Andy discusses the competition Diageo has faced in Ethiopia, marketing strategies and various other related issues about the Company.

Andy Fennell: We have been in Africa for a long time. In fact, it was 1862 when the first importation of the brand Guinness went to Sierra Leone. You are right that we have a larger business presence in certain parts of Africa compared to others.

Actually, inKenya, we have very big business. For the rest of Eastern Africa, however, we are just starting. Our strategy is to build local brands and then supplement them with our international global brands.

Q: Diageo has recently launched the non-alcoholic beverage, Malta Guinness, in Ethiopia, which has already been on sale in around 15 Eastern, Southern and Western African countries. How has this helped Meta Abo Brewery to circumvent the stiff competition it has been facing in the production and sale of its alcoholic products?

It is going pretty well, even though it is only a month or so since the launch here inEthiopia.

As far as the competition is concerned, we are confident that we will prevail in the market. Our ambition is to make Meta the biggest brand inEthiopia. We believe that this may take a little while.

The people will certainly remember when Meta was the biggest brand. So that is our goal Ã¢â‚¬â€œ to get it back to where it was. Read more