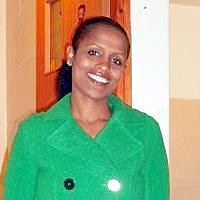 Ã¢â‚¬Å“As our organization continues to grow, we must recognize individuals whose extraordinary talents match up well with our needs,Ã¢â‚¬Â Jacqueline said. Ã¢â‚¬Å“Dvorah Marsha is one of those people. Her tenacity and courage in the face of adversity early in her life helped her to become the confident and successful person she is today. She will be an outstanding addition to our development staff and an amazing ambassador for the ITC.Ã¢â‚¬Â

An Ethiopian Jew, DvorahÃ¢â‚¬â„¢s inspiring story began over 20 years ago when, along with her grandparents, brothers and cousins, she walked hundreds of treacherous miles from her Ethiopian village in Gonder to the capital city of Addis Ababa. From there, she immigrated to Israel as part of Ã¢â‚¬Å“Operation SolomonÃ¢â‚¬Â in 1991. At the tender age of 11, Dvorah was introduced to tennis at The Marjorie Sherman Israel Tennis Center in Ashkelon, playing competitively and steadily rising to become the #5 ranking in her age group.

In 2004, after satisfying her military obligation as a sports instructor in the Israeli Air Force, Dvorah began coaching at the ITC Ã¢â‚¬â€œ Ashkelon while studying for her degree in Physical Education. She continued to Ã¢â‚¬Å“give backÃ¢â‚¬Â to the children as an ITC coach of one of the national girls teams while studying for a MasterÃ¢â‚¬â„¢s Degree in Child Development at Bar-Ilan University.

DvorahÃ¢â‚¬â„¢s role as Development Manager will be to assist in the critically important role of fundraising and donor management. Her activity will help support the various social impact and high performance programs that the ITC manages throughout the year. These programs are open to all children living in Israel, regardless of background, religious affiliation or economic circumstance. They assist children at risk, those with special needs like Down Syndrome and autism and children of new immigrants, while bringing together Israeli Arabs, Bedouins, Christians and Jews in ITCÃ¢â‚¬â„¢s coexistence program. The goal is to help enhance the social, psychological and physical needs of all Israeli youth to help them become lifetime champions both on and off the courts.

Ã¢â‚¬Å“I am looking forward to my new position to help the ITC continue to serve the children of Israel, Ã¢â‚¬Å“ Dvorah enthusiastically said. Ã¢â‚¬Å“They are our future, and I welcome the opportunity to be involved in helping to support the programs that are so vital to so many of our young people.Ã¢â‚¬Â

About the Israel Tennis Centers Foundation:

The Israel Tennis Centers Foundation (ITC) is a 501 (c) 3 not-for-profit organization that has worked since 1976 to help Israeli youth develop life skills through the medium of sport. The ITC serves over 20,000 children annually, many of them from disadvantaged neighborhoods or outlying development towns throughout Israel. The ITCÃ¢â‚¬â„¢s 14 centers stretch from Kiryat Shmona on the Lebanese border in the North to Beer Sheva bordering the Negev Desert in the South.Ã‚Â http://www.israeltenniscenters.org.