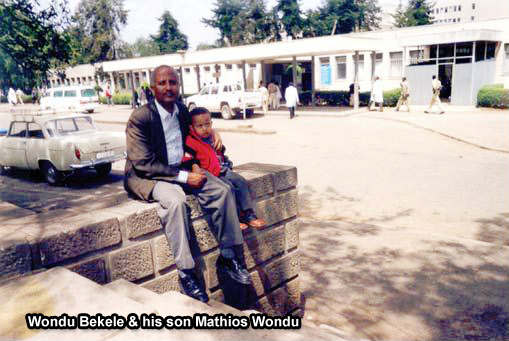 On the date of Ethiopian New Year I went to the Black Lion Hospital to visit my nephew, who was diagnosed with cancer and receiving treatment. After I had stayed with him for an hour, I along with child and his parents joined the holiday party organized by Mathiwos Wondu -Ye Ethiopia Cancer Society in the hospital for pediatric Cancer Patients.

According to Wondu Bekele ,who is the general manger of the organization such parties  have been held at the hospita  on the dates of the major holidays in the country for the past nine years  without interruption in the middle.

According to the flier circulating on the occasion it was revealed that the organization was established nine years ago by Mathiwos family and founding members both on purpose to remember the heroic struggle Mathiwos had made against cancer at the same time to extend helping hands for those children, who happens to be in the same fate like him and because of their peculiar socio economic standings could not afford to pay for range of services that cancer treatment entails.

The flier on part it discuss the reasons leading to the establishment of the organization underscore the non-existence of social services rendering organization  during that time to cater the various needs of Ethiopian pediatric cancer  patients as major cause and thus the organization was established to fill in the gab  on April 17,2004.

On the holiday party a number of individuals whose number I guess reach more than 120 were in attendance .while most of the participants were Pediatric Patients, the rest of the group was comprised of parents , relatives , volunteers , who support the organization in various means and staff members working in the  hospital.

I saw on the occasion a  group  of journalists and professionals donating 42,500 birr to the organization to help out its effort to support Ethiopian Pediatric Cancer Patients through the provision of cancer treatment drugs and the provision of other social services such as transport money , payment of diagnostic needs, food, shelter and food including others left unmentioned here. It was quite interesting to witness such active enthusiasm on people to help fellow others in problem. Read more