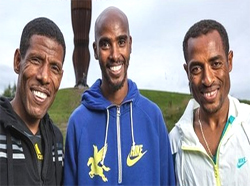 Mo Farah has promised “a great show” when he takes on Ethiopian legends Kenenisa Bekele and Haile Gebrselassie in Sunday’s Great North Run.

The trio, who have 12 world titles and seven Olympic golds between them, will compete over the half marathon course between Newcastle and South Shields.

“I’ve got the track speed but it all depends on how the race goes,” said Farah, now focusing on marathons.

“The most important thing is not about time, it’s putting on a great show.”

Farah, 30, became only the second man after Bekele to win bothÃ‚Â the 5,000m and 10,000m golds at single editions of the Olympic Games and World ChampionshipsÃ‚Â with his double distance success in Moscow earlier this year.

Three-time Olympic champion Bekele, 31, is making his competitive half-marathon debut on Sunday, and Gebrselassie has recorded by far the quickest time over the distance of the three men.