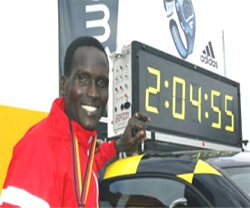 Tergat is among the new IOC members elected at the Olympics governing body’s congress that is going on in Argentina although he did not vote in the elections of the new president later Tuesday.

Kipchoge who is over the IOC membership threshold age of 71, is now a honorary life member of the Olympics body having been granted that honour with among others, former president Juan Antonio Samatranch. Read more