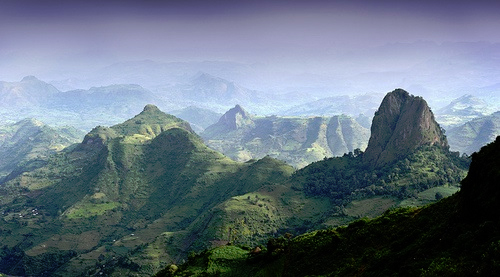 The Simien Mountains National Park is located in the Gondar Zone of the Amhara Region in the northern territories of the Republic of Ethiopia. It is about 120 km north-east of Gondar in Begemder Province which is the nearest town in the area.

The Outstanding central Universal Value of the park is made up of four locations including the Masarerya, Limalimo, the Ras Dejen Mountain and Silki-Kidis Yared area. Their interlinking corridors are free of human settlement and cultivation which serve as a key support to the living species in the park. The park is estimated to be covering some 220 kmÃ‚Â² of land in totality.

The park was officially commissioned in the late 1960s but was added to the United Nations Education Scientific and Cultural Organization (UNESCO) tentative list in 1978 and is now regarded as one of the most important global significance for biodiversity conservation sites.

The mountains are bounded by deep valleys to the north, east and south, and offer vast vistas over the rugged-canyon like lowlands below. The spectacular scenery of the Mountains is comparable to the ColoradoÃ¢â‚¬â„¢s Grand Canyon. (The Grand Canyon is a National Park in the United States of America located in the State of Arizona). Read more