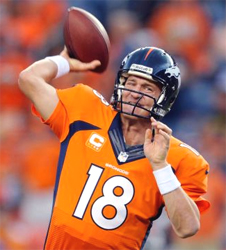 A record-tying seven touchdown passes Ã¢â‚¬â€ something no one had done in 44 years Ã¢â‚¬â€ made it worth theÃ‚Â while.

Connecting with his most prized addition,Ã‚Â Wes Welker, former college basketball playerÃ‚Â Julius ThomasÃ‚Â andÃ‚Â Demaryius ThomasÃ‚Â for two TDs each, Manning directed Denver to a 49-27 victory over the Super Bowl champion Baltimore Ravens on Thursday night in the NFL opener, a much-anticipated rematch against the team that ended the Broncos’ playoff run inÃ‚Â January.

Manning is the sixth QB in NFL history to throw seven TD passes in a game and the first sinceÃ‚Â Joe KappÃ‚Â did it for Minnesota against Baltimore on Sept. 28,Ã‚Â 1969.

Manning was 27 of 42 for 462 yards with seven TDs and noÃ‚Â interceptions. Read more