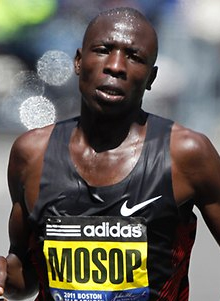 The Bank of America Chicago Marathon today announced that the 2013 elite competition will feature four of the world’s fastest marathon men and the top two finishers from last year’s women’s race. Kenya’s Moses Mosop, Dennis Kimetto and Emmanuel Mutai, and Ethiopia’s Ayele AbsheroÃ‚Â all rank among the top 11 marathon performers in history. Mosop leads the way as the second-fastest marathoner of all time with a personal best 2:03:06, followed by Kimetto (No. 6, 2:04:16), Abshero (No. 7, 2:04:23) and Mutai (No. 11, 2:04:40). In the women’s race, Ethiopia’s Atsede Baysa and Kenya’s Rita Jeptoo will face one another for the first time since their dramatic sprint finish down Columbus Drive last fall.

“It will be hard to top last year when the top three men all broke the previous course record and the women’s race was decided by a single second, but this is the field that can do it,” said Bank of America Chicago Marathon Executive Race Director Carey Pinkowski. “These athletes are among the most exciting in the sport, not only with their fast times, but with their proven ability to win on the biggest stages in the world. We have two returning champions in Moses from 2011 and Atsede with her memorable victory last year. They are the ones to beat, but they’ll have their work cut out for them against deep competition.”

The men’s field
The men will challenge the Chicago Marathon course record of 2:04:38 set last year by Ethiopia’s Tsegaye Kebede, who represented his country this summer at the IAAF World Championships Marathon.

Mosop was the runaway winner at the 2011 Chicago Marathon, setting a then course record 2:05:37. He missed last year’s race due to his selection to Kenya’s 2012 Olympic team and subsequent injury. He is back to full strength and looking to reclaim his title and course mark. In his debut at the 2011 Boston Marathon, he was runner-up in what stands as the second-fastest performance in history and the world’s fastest debut.

“Winning the 2011 Bank of America Chicago Marathon was one of the proudest moments of my career and I look forward to returning to a course and a city that I enjoyed so much,” said Mosop. “I lost my course record last year to Kebede and I was disappointed that I was not there to defend it. I know the competition will be great once again this year and I’m excited to return to Chicago.”

Kimetto arrives as arguably the hottest marathoner in the world. He finished second in his debut at the 2012 BMW Berlin Marathon in 2:04:16, establishing a debut world record on a record-eligible course. In February he won the 2013 Tokyo Marathon in course record time. Twenty-two-year-old Abshero burst onto the marathon scene in his first attempt at the distance by winning the 2012 Dubai Marathon in a course record 2:04:23, becoming the fastest 21-year-old and the youngest athlete to break 2:05. Meanwhile, Mutai is the most seasoned marathoner of the group. He’s the Virgin Money London Marathon course record-holder from his 2011 victory in 2:04:40. He’s had four other top five London finishes, was fifth in Chicago in 2008, second at the 2009 IAAF World Championships and runner-up at the 2011 ING New York City Marathon.

Far from a four-person race, the 2013 Chicago Marathon will feature additional contenders from around the world, including last year’s third-place finisher Tilahun RegassaÃ‚Â of Ethiopia. He recorded a personal best 2:05:27 in his Chicago debut, and won the 2013 Rotterdam Marathon by over a minute. Eritrean Olympian Zersenay Tadese is a five-time world champion in the half marathon and the world record-holder at that distance (58:23). Another half marathon specialist, Ethiopia’s Atsedu Tsegaye, will run his debut marathon in Chicago. His 58:47 at the 2012 Prague Half Marathon ranks him as the fourth-fastest performer of all time. History’s fifth-fastest half marathoner is also in the field – Kenya’s Sammy Kitwara. He was fourth in his marathon debut last year in Chicago (2:05:54). Australian Olympian Michael Shelley, silver medalist in the 2010 Commonwealth Games marathon, will aim for a breakthrough performance in Chicago.

Leading a strong contingent of Japanese athletes is Yoshinori Oda, the fourth-place finisher at the 2011 Tokyo Marathon in a personal best 2:09:03. 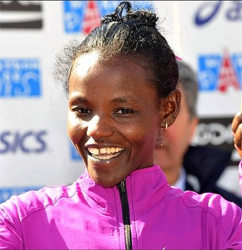 The women’s field
The duel between Baysa and Jeptoo at the 2012 Chicago Marathon tied for the closest margin of victory in the history of the women’s competition. Both athletes sprinted stride for stride en route to personal best performances, with Baysa getting the hard earned win, 2:22:03 to 2:22:04. (In 1999, Joyce Chepchumba edged Margaret Okayo by the same margin.)

In addition to her Chicago crown, Baysa was runner-up in 2010, and she is the two-time Paris Marathon champion (2009, 2010) and course record-holder.

“After finishing second at the 2010 Bank of America Chicago Marathon, it was my goal to come back and win. Last year, I was thrilled to accomplish that dream,” said Baysa. “Rita pushed me to my limit, all the way to the last step, and I’m sure it will be the same again this year. I am training very hard to be at my best in Chicago.”

After coming within a second of victory in Chicago, Jeptoo found redemption six months later at the Boston Marathon with a 33-second win. It was her second Boston title, which came an impressive seven years after her first in 2006.

Out to prevent another one-two finish by the top returners is a diverse international field, including Kenya’s Jemima Sumgong, the 2013 Rotterdam Marathon champion in a personal best 2:23:27. Another returner is Russia’s Maria Konovalova, the third-place finisher from 2010 (2:23:50) and sixth last year. Japan’s Yukiko Akaba brings a strong rÃƒÂ©sumÃƒÂ© to Chicago, which includes a 2:24:09 personal best, a victory at the 2011 Osaka Marathon, and a third-place London finish in April. A pair of up and coming Ethiopians arrive after breakthrough performances earlier this year – Abebech AfeworkÃ‚Â was second in Rotterdam in 2:23:59 and Ehitu Kiros Reda was second in Dubai in 2:23:38. Other international entrants include 2013 LA Marathon champion and Belarus national record-holder Aliaksandra Duliba (2:26:08), and Yue Chao and Zhang Jingxia of China.

For a complete roster of athletes, go towww.chicagomarathon.com/2013elitefield.

About the Bank of America Chicago Marathon
In its 36thÃ‚Â year and a member of the World Marathon Majors, the Bank of America Chicago Marathon annually attracts 45,000 participants, including a world-class elite runner and wheelchair athlete field, and an estimated 1.7 million spectators. As a result of its national and international draw, the iconic race assists in raising millions of dollars for a variety of charitable causes while generating $243 million in annual economic impact to its host city according to a report by the University of Illinois at Urbana-Champaign’s Regional Economics Applications Laboratory (R.E.A.L.). The 2013 Bank of America Chicago Marathon will start and finish in Grant Park beginning at 7:30 a.m. on Sunday, October 13. In advance of the race, a two-day Health & Fitness Expo will be held at McCormick Place Convention Center on Friday, October 11, and Saturday, October 12. For more information about the event and how to get involved, go toÃ‚Â www.chicagomarathon.com.