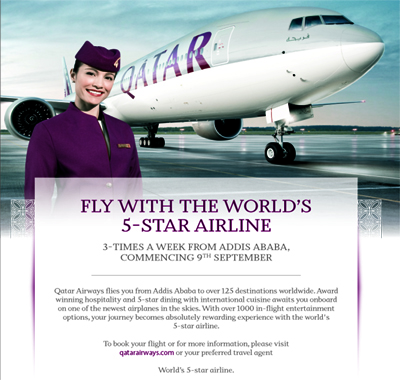 Qatar Airways, the national airline of the State of Qatar, is set to begin three- flights-a-week to Addis Ababa, on September 18.

The new service from Doha to Addis Ababa will be operated with an Airbus A320 in a two-classÃ‚Â Ã‚Â configuration of 132 seats in Economy and 12 in Business Class.

Ã¢â‚¬Å“As a route, the country has great potential when linked up with key feeder markets in Europe, Americas and other parts of the world. We are pleased to be reinforcing our presence in Africa with the addition of scheduled flights to Addis Ababa, allowing us to further expand our businessÃ‚Â on the African continent.Ã¢â‚¬Â

Ã¢â‚¬Å“Ethiopia is known for its thriving industries including coffee production, agricultural commodity exports and livestock production,Ã¢â‚¬Â Al Baker said. Ã¢â‚¬Å“There is clearly demand and hugeÃ‚Â potential to and from Ethiopia, one of the many undeserved markets across Africa. As a globalÃ‚Â  network carrier we are able to fulfill the needs of the traveling public from such markets and forÃ‚Â those wanting to travel there from destinations that we serve around the world.Ã¢â‚¬Â