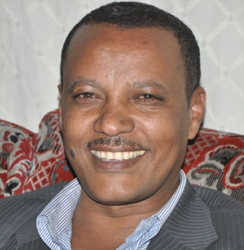 Alebachew Nigussie is deputy director general of the Ethiopian Revenues and Customs Authority. InÃ‚Â  addition to his responsibility at the tax authority, Alebachew is also the president of Ethiopian Athletics Federation.

Athletics occupies a very special place in Ethiopia, ever since the days of the great Olympian Abebe Bikila and the other athletes that came after him. But, in recent times, it looks like Ethiopia is losing its foothold in some of its traditional long distance disciplines. The most recent World Athletics Championships, held in Moscow, bears testimony to this fact; the athletics teams lost gold medals in both the male and female marathon categories, in addition to the menÃ¢â‚¬â„¢s 5,000 and 10,000 meter disciplines, which were among the traditional Ethiopian distances for years. On the other hand, the team registered commendable results in some new and unchartered disciplines, like the middle distance categories. The overall performance in this sense has generated mixed feelings among the public, henceÃ‚Â Dereje Tegenaw and Yonas AbieyÃ‚Â of The Reporter sat down with the president to look into the some of the complaints and discuss what potential direction the sport should take in the future.

The Reporter: The result obtained from the recent athletics championships in Moscow seems to have many sports fans talking about the fate of the Ethiopian athletics team.Ã‚Â  Of course, the main concern is losing the foothold in the country’s traditional disciplines. How do you see this? And what is the federation doing in this regard?

Alebachew Nigussue:To begin with, it should be clear that the body leading the Ethiopian Athletics Federation is made up of pro-bono professionals. However, the federation also has a sizable staff that looks after the day-to-day activities. The primary task of the federation is to facilitate basic training and competition, either in the form of providing finance or establishing training centers, training modules and other necessary equipment. In this regard, we can say that we have done a lot in the current fiscal year. The federation has performed better in light of its plan to take part in global, continental and domestic competition. And, Moscow was one of the plans for this year. The other plan was to devise a way to nurture young athletes and prepare the next generation for Ethiopia. This includes finding adequate sports professionals that can make the plan happen. We can say that we have been working closely with both the regional sport officials and athletics clubs. Taking about the Moscow athletics championship, we think the result obtained from the tournament was quite satisfactory. This is for the simple reason that we have managed to bring home ten medals and nine certificates. Hence, we can say that we not only took part in the competition but also came back with a good result. We say the result was good because we took part in a few disciplines in the competition.Ã‚Â  Of course, we are not saying that the ten medals is a lot, or is even enough to be proud of. In fact, we did better in Helsinki in terms of gold medals. As far as comments ago, we do not want to disregard any of it. The part about athletics, and especially long distance running, being Ethiopia’s flagship sport is very true. However, we have to know that it is up to the federation to take only what is useful to it. Read more