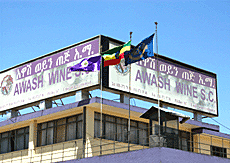 Addis Ababa, August 24, 2013 (WIC)Ã¢â‚¬â€œAwash Wine S.C announced that it has made over 90 million birr profit before tax in the just concluded budget year.

The announcement came here today at the annual employeesÃ¢â‚¬â„¢ day of the company.

Chief Executive Officer (CEO) of Awash Wine S.C Rezene Hailu said on the occasion that the company made 90.84 million birr profit before tax from the 6.4 million liters of wine produced in the budget year.

The companyÃ¢â‚¬â„¢s profit before tax was only 1.5 million birr 15 years ago, he pointed out.

The joint efforts of the workers and the management staff as well as the various measures taken at all levels are the reasons behind the success of the company, the CEO said.

This yearÃ¢â‚¬â„¢s celebration is unique as it coincided with the transfer of the company from state-owned to the private sector, he said, calling on all staff of the company to discharge their responsibility for further success.

Chairman of the Board of Directors of Awash Wine S.C, Teferi Demeke, on his part said the company has contributed a lot for the economic growth of the country.

Employees of the company, the investor who bought the company and the government would benefit a lot in the future as the profitability of the company will continue with additional investment,Teferiadded.

More than 600 employees of the company attended the celebration.Employees who served the company for a long period of time and reached the pension age also received thank you certificates.

The company has also awarded a modern car to Rezene Hailu, who served the company as CEO for a long time.