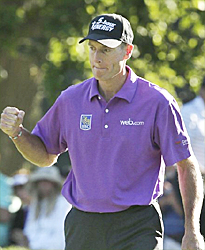 These putts were for par.

Jim Furyk, after a 3-wood struck so poorly off the 18th tee that he couldn’t have reached the green even if he had been in the fairway, worked his way up the 472-yard hole until he had a 15-foot putt from the fringe to keep a one-shot lead. The ball curled into the left corner of the cup, and the 43-year-old emphatically shook his fist.

Adam Scott, whose sweet swing turned sour on the last few holes, was on the verge of letting the lead get another shot away from him when he knocked in a 15-foot putt for par on the 17th hole, bowed his head and pumped his fist.

And then there was Jason Dufner, whose disappointment turned to surprise on the 18th hole when he took a step toward the cup to tap in a missed putt and watched gravity pull it into the hole for a par that put him in the final group. read more