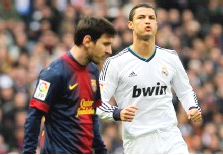 Lionel Messi, Franck Ribery and Cristiano Ronaldo have been named on the three-man shortlist for UEFA’s Best Player in Europe award for the 2012-13 season.

The list is compiled of votes from journalists from each of UEFA’s member national associations – the winner will be announced in a live vote during the Champions League group stage draw in Monaco on August 29.

Andres Iniesta was awarded the accolade last year while his Barcelona team-mate Messi lifted the prize in its inauguralÃ‚Â edition during the 2010-11 season.

France international Ribery, meanwhile, was a key part of the Bayern Munich side which became the first German club to win the treble of Champions League, Bundesliga and DFB-Pokal last term.

The positions from fourth to tenth have already been decided and will remain fixed, with Borussia Dortmund striker Robert Lewandowski fourth, and Bayern team-mates Arjen Robben and Thomas Muller fifth and sixth.