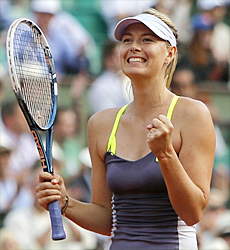 Russia’s Maria Sharapova heads the list of highest paid female athletes for year ending in June, banking $US29 million, according to Forbes.

But the magazine says it also highlights the yawning earnings gap with their male counterparts in most sports.

Russia’s Maria Sharapova headed the list, published on forbes.com, earning a total of $US29 million ($A32.5 million) between June 2012 and June this year.

Tennis took the top four positions, with world number one Serena Williams of the United States second ($US20.5 million), China’s Li Na third ($US18.2 million) and Victoria Azarenka of Belarus fourth ($US15.7 million).

US Nascar driver Danica Patrick (fifth with $US15 million), South Korean figure skater Kim Yuna (sixth with $US14 million) and American golfer Paula Creamer (10th with $US5.5 million), were the only non-tennis stars in the top 10.

But the business magazine says disparities remain between men and women in terms of earnings in sport.

World number one golfer Tiger Woods, for example, is the highest-paid athlete on the planet with earnings of $US78 million in the 12 months between June 1, 2012 and June 1 this year.

Los Angeles Lakers basketball star Kobe Bryant will earn $US30.5 million next season but the highest salary in the women’s equivalent of the NBA is $US107,000.