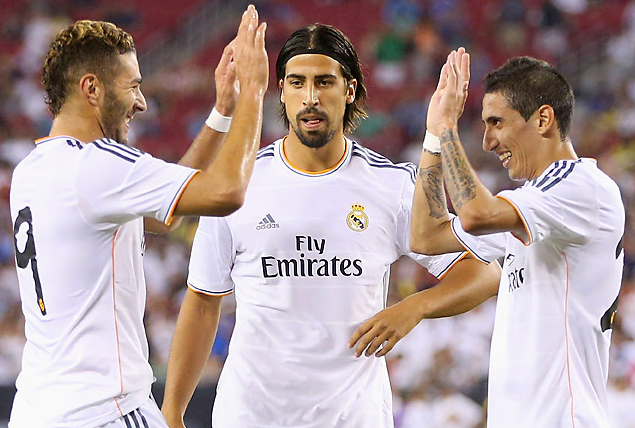 The match was the first for both teams in the inaugural Guinness International Champions Cup tournament, which features six other teams from Europe.

Real Madrid was too talented for the Galaxy, as Ronaldo had multiple chances to score early in the match. A cross from DiMaria found Ronaldo in the sixth minute, and his shot hit the top of the goal and caromed away.

Ronaldo also had quality chances in the 18th and 22nd minute, Galaxy defender Sean Franklin trying his best to defend Ronaldo from his right back position.

Real Madrid had the vast majority of the scoring chances in the first half. The Galaxy’s best opportunity was a near own goal from Real Madrid’s Daniel Carvajal in the eighth minute. Galaxy midfielder Hector Jimenez chipped a ball toward the goal that Carvajal almost misplayed with his clearance.

The fans in the crowd of 38,922 rose to their feet every time Ronaldo touched the ball. The Di Maria-Ronaldo connection almost produced another result in the 38th minute, as Ronaldo had plenty of time to settle a pass at his feet, dribble and shoot. But his shoot went over the goal.

Ronaldo left the match at halftime, replaced at forward by Benzema. It took the Frenchman only six minutes to score.

Francisco Alarcon looped a pass to Benzema, who was in open space and shot the ball past Galaxy goalkeeper Brian Rowe.

Real Madrid was close to a third goal after some nifty dribbling and fakes from Alarcon at the top of the penalty area, but his 60th-minute shot was saved.

Jose Villareal pulled the Galaxy to 2-1 with some skillful work in the 63rd minute. Seconds after Brazilian star Kaka left the match for a substitution, Villareal took two touches to get some room and fired a shot past Real Madrid keeper Diego Lopez.

Alarcon was subbed out in the 73rd minute.

Di Maria found Benzema in the 74th minute with a cross over the Galaxy defenders for the final goal of the match.

The Galaxy play Juventus of Italy, with Real Madrid moving on to face Everton of England. Both games will be at Dodger Stadium in Los Angeles on Saturday.