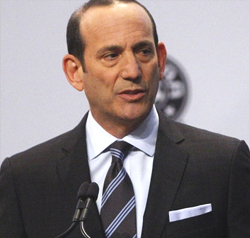 Commissioner Don Garber announced the league’s plans during halftime of its annual All-Star game Wednesday night. The location of the teams has yet to be decided, but Garber said the league has already had discussions with potential owners.

The news came one day after Hunt Sports Group announced it was selling the Columbus Crew to investor Anthony Precourt, and with the league set to add a 20th franchise in New York in 2015.

Garber told The Associated Press during an interview this week that the issue of expansion would be discussed “in great detail” during a meeting of league owners on Wednesday.

“The strength, passion and vision of the MLS ownership group is the foundation behind the success of our league,” Garber said. “We look forward to adding new partners with the same commitment to the sport and love of the game.

“As MLS enters a period of accelerated growth,” Garber said, “the addition of new teams will allow us to expand our geographic coverage, grow our fan base and help us achieve our vision of being among the best leagues in the world by 2022.”

MLS will have added 10 new teams since the 2005 season when New York City FC begins play, and Garber said that has helped to spearhead a significant growth in the game in the United States. Ã‚Â Read more