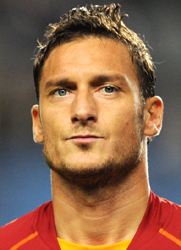 Francesco Totti said he turned down an offer to play in Major League Soccer as he is focused only on his club, Roma reported ESPN.

Totti, 36, was contacted by Marco Di Vaio, of Montreal Impact, and the former Italy international asked him to join the club, who play Roma in a friendly on August 7.

But he decided his future was with Roma, and told a press conference in Kansas City: “It’s very gratifying to come up against a friend like Di Vaio.

“He’s a great player and a great person, and he’s really happy in Canada. He wanted to give that experience a go, and he’s delighted with the way things are going.

“It’s true that he asked if I’d like to play in America, but all I have on my mind right now is Roma. The club, with the signings it has made, is trying to build a side on a level with the best in Europe.

“We want to become like them as soon as possible. We’re optimistic. You can only win things when you have strong players.”

Before facing Toronto, theÃ‚Â GiallorossiÃ‚Â meet the MLS All Stars on Wednesday, and Totti expects that game to be a stern test of his side’s credentials.

“The fact they beat a team like Chelsea [last year] says it all,” he said. “The MLS has grown a great deal in recent years and has become very competitive, both technically and tactically.

“There’s going to be a lot of quality on the field, and I bet it’s going to be a spectacular match. There’s no doubt it’s an honour for me, and for Roma, to take part in this game.”

Earlier this month, TottiÃ‚Â indicated that he could retire from the gameÃ‚Â at the end of the forthcoming season.