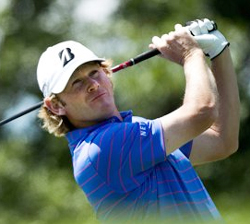 Snedeker won the Canadian Open on Sunday, a day after Hunter Mahan withdrew with the lead before the third round when his wife went into labor. Kandi Mahan gave birth to daughter Zoe Olivia early Sunday in Texas.

”Zoe will be getting a very nice baby gift from me,” Snedeker said. ”I can’t thank Kandi enough for going into labor early. I don’t know if I’d be sitting here if she hadn’t. But that is a way more important thing than a golf tournament. I missed a golf tournament when my first was born, and it was the best decision I ever made. I’m sure Hunter would say the same thing.”

Snedeker closed with 2-under 70 for a three-stroke victory.

”Just ecstatic right now,” Snedeker said. ”This is a tournament I said early on in my career I wanted to win just because my caddie (Scott Vail) is actually from Canada and it’s his national open. It meant a lot to him, meant a lot to me. Third-oldest tournament on tour and it’s got some great history to it, and now to put my name on that trophy it means a lot.”