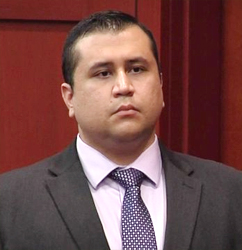 Lawyers for Mr Zimmerman, 29, argued he acted in self-defence and with justifiable use of deadly force in the death of Trayvon Martin.

The jury retired on Friday to consider its verdict on charges of either second-degree murder or manslaughter.

The case sparked a fierce debate about racial profiling in the US.

Police had asked residents of Sanford, Florida – the town where the shooting took place – and the surrounding area to remain peaceful once a verdict was announced.

As the jury retired on Friday, the judge told the panel of six women to consider whether Mr Zimmerman, 29, acted in self-defence and with justifiable use of deadly force.

Without explicitly discussing race, the prosecution had suggested Mr Zimmerman assumed the African-American teenager, who was wearing a hooded sweatshirt as he walked in the rain, was up to no good.

But the defence said Trayvon Martin punched their client, slammed his head into the pavement and reached for Mr Zimmerman’s gun.

The accused, who was legally armed with a pistol, had been sitting in his vehicle on a dark street when he saw Martin.

Mr Zimmerman telephoned police to report a suspicious person, then left his vehicle in apparent pursuit of the teenager.

Shortly afterwards, Martin was dead of a gunshot wound to the chest.

But prosecutors said the accused had told a series of lies.